Let us use stabilizers to choose perks when fusing

Rather than playing around with the absolute crap tier perk lottery and end up with rerolling the last wheel around 10 times before you get it to match all the other fused wheels with perks, because instead of giving you the power drain perk it just twiddles back and forth between tonnage and surface traction. I am drowning in stabilizers and it’s fusion event day, yet it’s still a pain in the behind. I am 16 Sabbath wheels deep in this by now and those are not cheap by a long shot, I have already abandoned all hope to even end up with 6 fused wheels with the same fusion, only 4

20 sabbath wheels to get 4 with matching fusions

You already have the most OP wheel in the game and you want the ability to fuse 6 of them for the meta traits. I detest the poor balance in this game but you meta chasers are every bit as bad.

My friend had the battlepass Cohort from season 2, +Resistance +Power, and two other Cohorts, and he rolled twice, then crafted a third without rolling for the all crucial + 10 percent mass. He is now lamenting his vast loss of resources.

This round of fusions, I rolled + resistance+mass on my Humpback on roll number 2 and decided this was good enough. I also rolled + resistance, +reload on a Chameleon first roll, (Yay) and I fused two hermits. I got power drain on one and traction on the other.

I have a couple more Hermits to do, but am considering fusing my Aegis shield. This is quite a gamble because I want +duration but would also be happy with + reload.

I detest the poor balance in this game but you meta chasers are every bit as bad.

What’s wrong with meta chasers? I don’t understand all the negative stuff about players willing to spend time and/or money to get their build as good as possible. Personally I don’t think Crossout is worth spending that much money or time on it, but if someone thinks it’s worth doing I can only respect it. 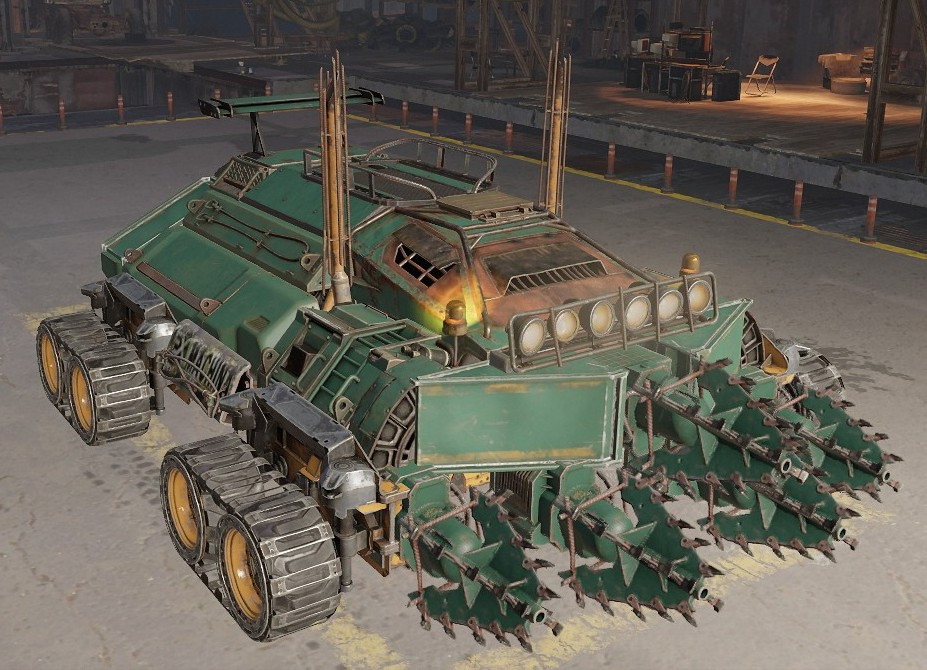 Ya, nothing. No problem.

Fusion feature sucks cash. Works perfectly. Heaps of not fun. Mostly a disappointing wallet thinner that leaves me mad and frustrated, especially when it comes to wheels, I think. It’d be nice if they just let you fuse them by the set of four or even two, or like the OP suggested allow us to use the near worthless (carrot on a stick) Stabilizers to chose the upgrade.

Nobody takes their car to the garage and just asks the mechanic to “Just suprise me, dude.”

“I know you asked me to flush the radiator and install a new water-punp, Sir, but I thought I’d just change the oil instead…That’ll be $250.”

People would get hit with bricks if they pulled this schit IRL.

If there were CKs you could get out of fusion, it might be amusing enough then, that I’d be less frustrated with the crappy perks you repeatedly “randomly” get assigned. I would fuse just for the CKs, probably, and actually, I’m surprised it doesn’t work that way. I think fused items ought to get some extra bling, a make-over. Why wouldn’t they?

The art-work is the best part of this game, IMO. I’m glad they are leaning into it a little more these days. They always ace those assignments, and the game looks sharp AF. It helps me not think about the other stuff (like fusion).
She’s a moody 817CH, but she sure is pretty. She even puts out once in a while, and just like IRL, I never have any idea what sets her off. None.

Fusions are designed to be a coin sink. They also use tactics like reduced fusing costs to appeal to players’ FOMO.

imagine you get to grind for hours on end for some kewl new weapon or whatever.

then imagine how much more fun it would be to grind 2-10 times as long for the same weapon but a little bit better.

it plays the same but if you dont get the better version youre constantly at a slight disadvantage against those who do.

instead of grinding you can also just pay to get the better version of a weapon directly.

the entire “fusion” idea is one big sukker magnet from beginning to end. nothing about it is fun.

it requires repetitive grind or straight up cash in exchange for being able to play on an even playing field.

its designed to frustrate you.

So, how do we get around it, and since the matchmaker in pvp leans on the scales anyway, how much does it really matter?

I don’t think my kill rate appears to be effected much by fusion, because any time I do well, I just get tougher matches.
But, I can say that some of the improved features fusion brings makes the game more fun, like fusing for power, or weapon rotation speed. In some cases it simply makes a build possible with a tonnage buff, when it wouldn’t otherwise be so.

As for being at a slight disadvantage in game due to fusion, IDK. I’ve played a lot with non-fused gear. It seems like the matchmaker tries to rinse off any advantage or disadvantage your build might have by either ratcheting up or down the quality (power-score) of your opponents and/or team mates.

I’ll pass on having an argument over whether or not that actually happens, but I will agree that fusion is a coin-sink. I’m just not sure how much of a difference it makes on the actual score board…in pvp.

You knew the risks lol you can’t complain, if you cant afford it then don’t do it, that’s the reason fusing is end-game sort of stuff

Because they sacrifice having real fun and challenging themselves to do something cool or epic for simply winning at all costs, where if the fun winning with the most powerful meta setup when you can do it in a sleek car and look cool while doing it? only the saddest players who never got good at other comp games do it and I love slapping them day-to-day knowing they’ll never look or be as good as me, sorry not sorry for the ego

When you’re actually good at games, you challenge yourself to do things in a not-so-meta way, I remember getting frying pan final kills in pubg, or killing enemies with rpgs or throwing knives etc in battle royale final kills, just playing the most outragiously dumb classes in CoD games just to show we can do it and still win all the time, these meta chasers aren’t ever goign to challenge themselves because its the only game they’ve gotten good at, because you can pay, copy builds and tryhard 50% of a team as a squad to win kekw

I’m glad somebody else sees it that way too, and I wish more people would try it too, but whatever.

I feel like since its a “video” game it ought to be enjoyable to look at, right? This game is expert at visuals and style too, so it seems like a pity to not exploit it (they have cool legos)…I suppose in a way I’m min-maxing too? I like to see how much art I can squeeze out of a build and not get pwnd.

Buff Stabilizers, please. Crafting is tedious too. All the clicking back and forth is silly, I think. We need trees we can climb by gathering resources, maybe. IDK. I don’t like crafting at all, I have way too many Stabilizers and I don’t care for their slot machine characteristics. This crating feature seems like a major feature of the game (Craft-Ride-Destroy) and an improvement here could have significant impact on the popularity of this game, I think.

In fact you are a meta chaser yourself 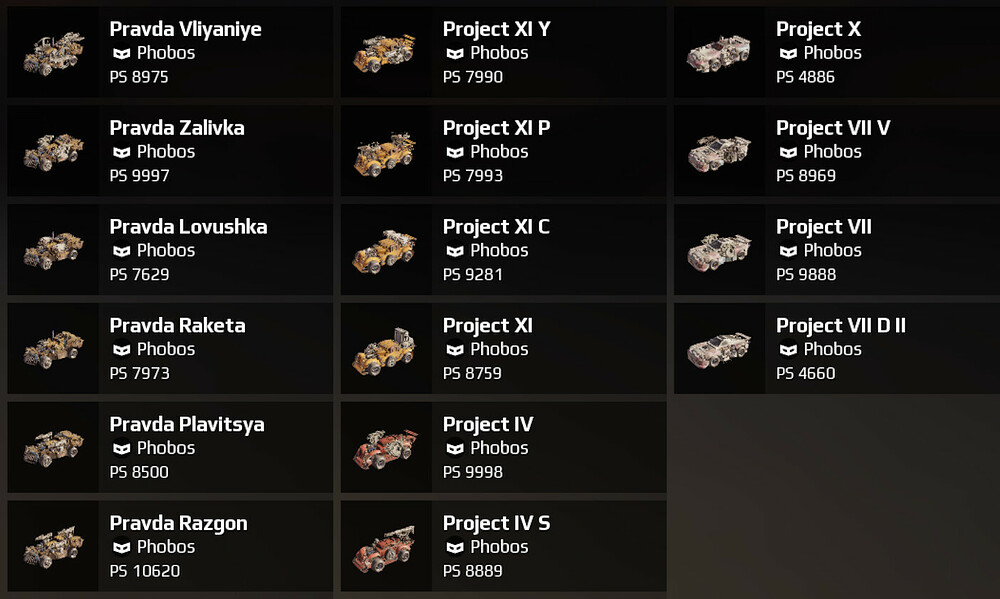 Cope, I do not chase anything

I’m glad somebody else sees it that way too, and I wish more people would try it too, but whatever.

Like I could sit on this hill and sniper, or I can try and take a cool shot…

And others want to seal club all day with the same car design over and over again.

Do you work for media, because that’s one hell of a narrative spin