This drone comes from a combination of help and attack purposes and is very valuable amongst the long travelling adventure types it has multiple purposes ones to help out others who broke a wheel along the battle and it connects to that players open spot. It works with most light to medum tire sizes and will kind of fit on the large wheels setups but it overheats a little because its under pressure. But the other purpose is simple it goes after enemy tires and will try to rip them apart so you can catch up to that attacker. It then starts going after the cabin with spikes down the middle of the tread ramming into the cabin and repeating the process. Has a great ability to travel long distances to attack incoming vehicles and attempts to slow them down and scavenge whats left of this broken down angry hunk of metal. Seems to really like bouncing into things but it tries to stay away from allies and it goes for the stragglers hiding in the back so its not so much an invasive frontal attack drone it flanks from behind them for better chances of survival. 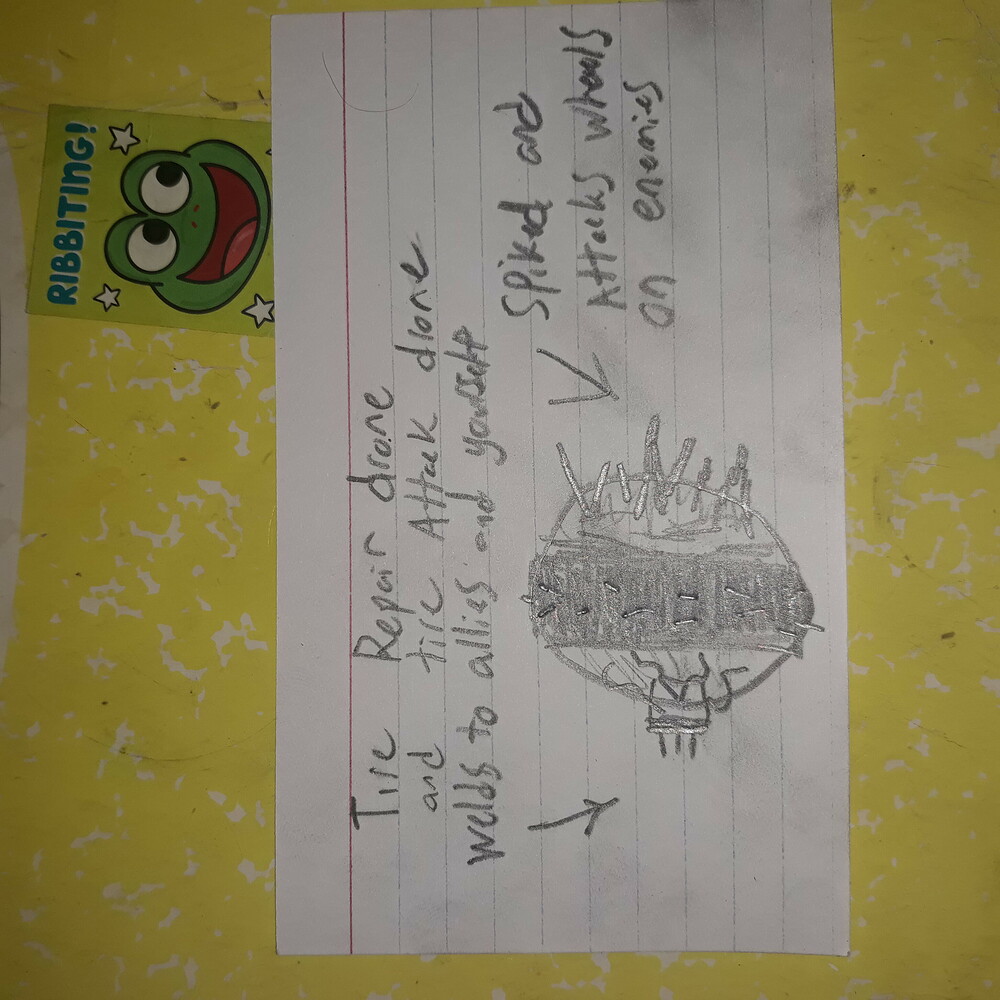 1 - Love the arm hair in the upper left corner of the paper, nice touch. I always put one in every one of my designs to give them that manly look.

2- Would love a melee drone but it’s a weapon that would be ok vs some and ineffective vs some other targets. Crossout became too much of that already. Would have to be damn fast and have crazy acceleration to catch low ps hovers or do a fair bit of dmg vs tracks and legs to even the playfield.

3 - I don’t like the part where it goes after enemy tires first. It’s obvious how much other movement types will have an advantage here. BUT I do like the tire repair function… While I don’t like magical repair of lost guns and armor parts, tire repair on the go I can do with.

p.s. No, really, the arm hair seals the deal, I vote yes with some adjustments!

Yeah i was drawing hard u lose hair when u draw i guess. Idk is someones hair. I’ll blame the cat first haha.

I had a different approach posted on the old forums. (for the lost tires, in particular)

I suggested that instead of just being a dumb decor, spare wheels could actually be used to give some wheels back to teammates. This would encourage teamplay more, and also the use of wheels which are currently a bit of a rare movement part in battle.

Installment would take about 2-3 seconds per wheel, and you can have a maximum of 2 spare wheels, to avoid people exploiting this feature.

I feel like that would be a cool addition!