Why not remove the tilt for hower? Tonnage reduced from 900 to 650 kg

Thanks to whoever made it unusable: porcupine MASS 720-kg- CC-18 Typhoone 2200-kg- ZS-52 mastodon MASS 2855-kg.
There was a time when he thought things would get better now…
How long does the Hower who invented this net coolness have to lean forward, backward, side to side? What is a 45° tilt angle anyway?
Yes, what is even more annoying is hammer fall MASS 122-kg, breker MASS 180-kg, punisher MASS 430 kg, Varum MASS 700-kg, MG14 arbiter MASS 279 kg
It’s all good, it’s just a big pile of shit.

You are seriously surprised that hovers got a nerf? They werent nerfed enough.

I was expecting the 700kg tonnage as stated in the changes. So built with this restriction in preparation for the update. 5 builds reworked from the full 900kg down to 700kg. The 650kg was a bit upsetting, but the re-reworks only cost me at most 100 points of structure per build. Still sucks but is manageable.

yes if everything is fused MASS

Hovers needed the nerf. They probably need to drop the speed down 5km or so still too. Idk. Maybe hovers are fine now, but they still seem very strong. They def dont suck at all thougb.

are you really that stupid? do you know how many C’s you see there?
All weight reduced parts, 3 weapons cost 200000-c

Whatever dude. Use a med cab for your porcs. And use an echo for your canons. Devs dont want us useing heavy weapons on light cab hovers anymore. And tbh i think thats fine and is healthier for balance.
The new hovers were waaay overperforming.

considering people were flying around with 2 train plows on a super meta build on a light unfused Catalina cab before the update, I’m not opposed to the changes, the tilt is a good thing it means you can have high speed hovers that aren’t godly OP personally I don’t mind the state of blue hovers on light cabins, need to remember that you can use colossus on a light cab to get more power which lets you have high accel and high max speed
blue hovers on medium cabs however are a different story, if you want to make use of the max speed of blue hovers 95km you are going to need to use either cheetah or colossus for the extra 20% cabin speed, and phobos can be used for another =5km cabin speed, however, cheetah has 25% power and oppressor has 30% power, which feels very underwhelming on medium cabs when you put a reasonable amount of hovers (you know 7+ hovers) 7 blue hovers on a medium cab has very slow acceleration nonmatter what you do to it, if you use 4 blue hovers on a medium cab with this setup, you get high acceleration but you loose the ability to have redundant hovers, personally, i would love to see a high speed high power engine with no tonnage and no increased mass limit, it would make a wider variety of builds much more viable to play with

Have you tried using the red hovers? You get more tonnage and less tilt out of them.

Or better yet, have you tried taking your S+M1™ MegaCrutch™ and fuzzing off, never to be seen again?

if you wane fix some of the hover builds might wane use opressor engine (easyest alternative).
instead of collusal

But yeah they said 700 planned but made it 650 tonnage sadly with 280 mass expense on icarus 7 the effectiveness of tonnage is qeustionbale / 650 Tonnage -280 MASS = 370 tonnage useability.

So thats simple example of (not fuzed versions).

I got a feeling they wane make blue hovers only for light builds with serten weaponry.
and red ones for heavyer builds.

But yes the devs make us play different again.

Stil i would like to see a mass reduction on light hovers as compensation for the less tonnage.

Devs already sated outright they intended to make blues for lighter builds and reds for heavier. So yes u guessed right.

I agree except for the last sentence.

but you can’t do that by punishing reds because the other player can’t buy or craft them.
and then add another 20-30,000 to the red one so that your car can move at once. the problem is that I didn’t achieve anything I wanted with it, only the heavy weapons were rendered unusable. all my parts are mass pulled, everything can go in the trash. look at the picture MASS-122-kg hammerfaall

Im not sure what point your trying to make here. Looks like your a meta chaser mad his meta is less meta now.

It’d be magic if somebody bought this game and just completely removed hovers. I tried to get my friend from other games into XO and he quit the moment he had BP items that got his build into sidehover PS. They are that far against the balance and setting of the game.

Maybe not use the most heavyest trainplow bumper on that build could also help a bit with the durability and balance of the build.

effective durability and lifepool are like 2 different things and 920 HP aint much.
no balance there. + if you lose any of those hovers before that bumper goes the build becomes a snail. (due of current update).

I think you didn’t understand what I wrote, please read it again and I see two more people are in the dark. 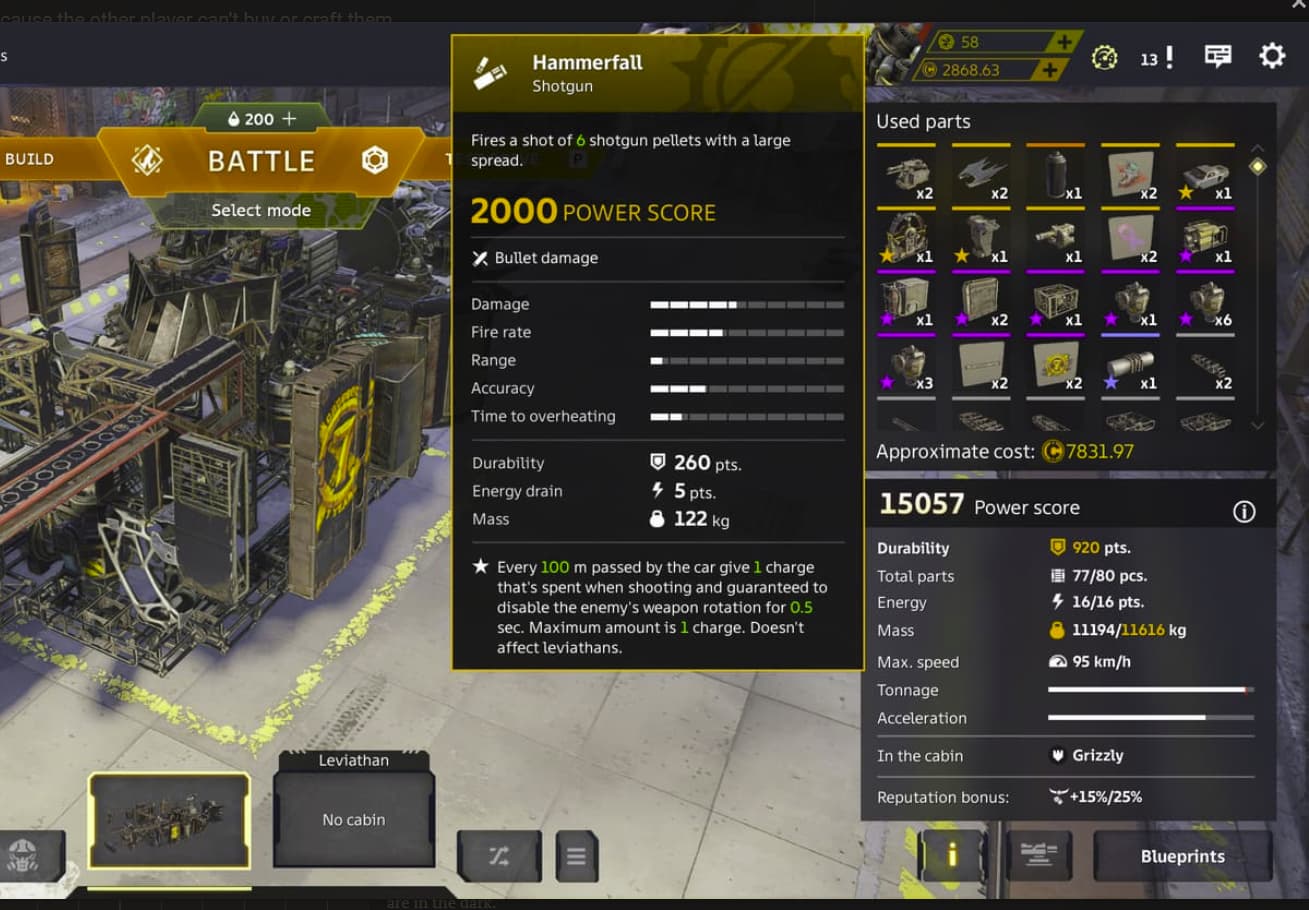