Crossout is turning into a Melee Trucking game

That has always been the case, only the delivery methods change. Don’t expect Gayin to destroy the W meta any time soon, it’s like artillery in World of Tanks, exists solely so even people with a single braincell that bounces around in their head like the DVD logo can win, enjoy the game, and spend money.

It is definitely not.

Epic wheels all need nerfs except Omnis. They have too much dura and grip and so they are simultaneously the most durable builds in game and the most maneuverable. Wedges and rush builds were always a problem in this game, but before Bigfoots were added those builds were hard countered by dewheelers, usually equalizer or spectre players.
Dewheeling needs to come back.

Hermits and Sabbaths have completely replaced bigfoots lmao and to an extent small tracks. I called this shit as soon as their stats dropped and people were like, “But dude, they aren’t even in the game yet, you can’t say they will be op, just give them a chance”. I WAS RIGHT!

Small tracks also need a nerf to their dura, and less grip because atm tracks are glued to the ground until you corner tight enough and break traction on one side. Then you just spin out and flip. Full reverse speed and 400 HP slabs of HP on the frames going 90kmh IS OP.

For reference armored tracks are roughly 16 pins long and 4 pins tall and they’ve got roughly 1600 HP with resists. 1600 hp over an area of 64 pins on a part that only goes 65km/h. Its got 25 HP per pin. Hermits cover about 16 pins being a 4x4 medium wheel, with 310 dura at 0 perk they’ve got 19hp per pin while being uncapped in speed.
Contrast this with augers which have the same area as tracks while half the HP and less speed.
Mathematically speaking facts here, epic wheels are ALL overpowered in durabiliy.

I agree, but I think it’s their wicked speed that makes them too much to deal with.

I’m glad others have noticed the crazy pvp trucker melee madness. It’s rich, but what makes it worse for me is when I do melee too (can’t beat’em, join’em?). Some of those matches are just straight Borers vs Borers with 2/3 of the players running variations of that same build. I think it’s a little funny, but slow builds must hate it. It’s hard to run cannons in that environment, but there are tracks, and legs, a new monster cannon, and of course hovers that help. Actual team mates help the most, probably. Friends don’t let friends get ground up into hamburger while they watch from a safe distance. The mob rules.

If you could find a way to kill them, you wouldn’t pin it on wheels. I have literally NO problem fighting melee at any PS.

7499? Now boosters are viable for the PS. Stupid easy.

13k and up? Getting harder, but still doable. Especially now that the Kami cab is here.

The irony is that someone said dewheelers used to be the answer. As in MGs. That’s what I’m using on all of these (along with Parsers at 5500 and up)

It used to be zippy hovers you could never catch at medium power scores. It used to be shotgun wedge meta further down. It will always be something. You just don’t like that it’s easy for them and hard for you. This game is rock, paper, scissors. The enemy is throwing rock instead of scissors now. Time to adapt instead of crying nerf to the entire movement part class.

Because as soon as you get the hermits nerfed, Scorpions will start to dewheel everything in this game. The dirty secret no one talks about is if a Scorpion takes 3 wheels off of a maxed mass heavy build, it stops moving. If they don’t use colossus, it’s one shot per wheel for every wheel in the game besides hermits. Take 2 wheels off anything else and they begin to crawl as well.

Seriously, not poking the bear on this one, but can I show you some MG or Parser builds so you can defend yourself? Speed, maneuverability and out-driving them is your only defense, as it should be. If they make contact, the SHOULD be in a plus situation likely leading to your death. I’ve got builds at all Powerscores that fight them all. 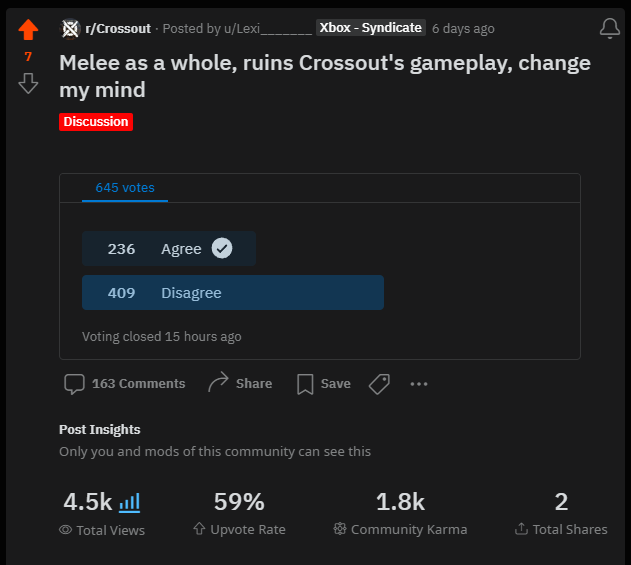 Considering how many people also run melee of some kind, and the fact that people are lumping in passive melee for some reason, that’s a big % for just 1 thing ruining the game

Yeah but you have to admit when all your team die and you’re left 1v4 or so melee players and they can just sit on the base, what do? it’s annoying and I’ve never felt out-played by a melee build

This game is rock, paper, scissors. The enemy is throwing rock instead of scissors now. Time to adapt instead of crying nerf to the entire movement part class.

DING DING DING YOU GOT IT! The secret of the game. Deliberately unbalanced with an ever changing meta. Just adept, bro. Just pull a completely new build out of your ass every two months, bro. What, don’t like getting owned over and over again while you grind for it? Open your wallet. Free to play game, by the way (;

I loved artillery lol, I know it was low skill but I hated that if I rana normal tank in that game I could just face people 2 tiers higher than me and barely pen them unless I learn every weak spot, which was kind of cancer.

But I do admit you could play artillery 1 handed 90% of the match until you can had to barrel stuff someone, half the fun was waiting on the french reload of 60 seconds and just watching the enemy backline for an arty shot and then destroy them, kekw so many messages

Because as soon as you get the hermits nerfed, Scorpions will start to dewheel everything in this game. The dirty secret no one talks about is if a Scorpion takes 3 wheels off of a maxed mass heavy build, it stops moving. If they don’t use colossus, it’s one shot per wheel for every wheel in the game besides hermits. Take 2 wheels off anything else and they begin to crawl as well.

Scorps never got any nerfs other than ps. They’ve needed a pen rework for years, instead players will defend laughably overpowered movement parts designed to tank dual scorp hits.

Scorps never got any nerfs other than ps

Also any complaints about this, you buy 2 Astraeus, they do a tonne of damage and faster projectiles speed than scorp, plus you can fuse it for 25% projectile speed, I love my Astraeus

An astra cannot pierce 6 blocks of infinite HP and do 280 damage to modules behind that 6 block slab of infinite HP. Its not going to drill frames through a wheel that hasn’t fallen off.

If you have more than 2 explosives in your vehicle then that’s your fault, a gen and 1 epic ammo is all you need in anything, maybe 2 epics, but if you’re playing at a PS so high that you need 2 epics then you should have sufficient armour.

Its not going to drill frames through a wheel that hasn’t fallen off.

Well if you would use them you’d know that doing 300 damage per shot means the first shot usually breaks whatever you aim at and the second goes right through into what is behind it, if you use Jay it then goes to 750+ so 375 per shot which will break a hermit that isn’t resistance boosted anyway

Either way, no sht it wont pen, thats not how you use the gun, you were talking about wheels but feel free to change the subject again

Btw 6 blocks will reduce scorp shot to around 140 damage to an explosive, which wont destroy a bootstrap, apollo or epic ammopack

Okay you are right, but still the Astra does not have the same damage potential as the scorp and the firing + self damage mechanics make it significantly harder to use. And the whole thing about bringing up scorps was their dewheeling potential. So what if a scorp dewheels you? The Typhoons dont. Porcs usually turn you into a flaming cab with frames and wheels. Epic weapons have basically no ability to dewheel epic wheels. You could use two astras on a hermit and its not going to do that much for how fast that guy is going and how many more wheels hes got.

That’s why you then aim for something else, with such damage potential just go for cab or weapon damage, it’s rare I’ll go for wheel with the astras unless they have 4, and even then I’ll probably pick at them with non charged shots, its the same as scorp, you pick what will be the best option.