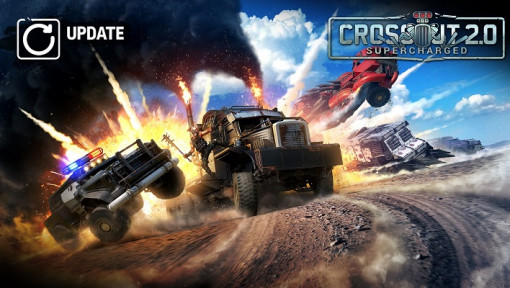 Choose one of the available armoured cars, hit the streets of the Dead city and create a festival of chaos and destruction to the delight of Mr. Twister. And let the Judgment night begin!

Attention! The brawl and Battle pass season will be available from November 24 to December 14 inclusive!

A unique pack that contains a themed armoured car, as well as access to additional rewards in the “Mr. Twister” battle pass and an additional slot with an armoured car for the brawl.

The first years after Crossout were filled with gruesome and bloody events. The “Judgment night”, conducted by a mysterious man in a mask in the deserted cities, has become legendary. Those who survived it were promised to have their one cherished wish fulfilled. Back in those days, most people dreamed of only one thing — to get away from this meat grinder. And to make this wish come true, they were ready to participate in this event for the last time. The stories didn’t tell if anyone really got what they were promised. But, according to rumours, the cars of the “Judgment night” participants can still be found somewhere in the dark streets of the deserted cities.

Attention! The pack will be available until December 14 inclusive!

The location was created specifically for the “Mr. Twister” event and PvP brawl “Judgment night”.

Comment: “Varun” stands out because of its high effectiveness, which it didn’t show before the updated co-drivers and the “Omamori” module appeared in the game. The changes are intended to simplify the gameplay against this weapon, while also preserving its competitiveness.

Comment: this cabin’s perk was highly effective and easy to use which, combined with other ways of increasing damage resistance, provided too much durability to the builds with this cabin. These changes are aimed at reducing the effectiveness of stacking up the bonuses and maintaining them.

Comment: “ML-200” were too slow when used without the “Steppe spider”, which noticeably reduced the variability when building vehicles with those parts. The perk of “Steppe spider” was changed, and the mechanical legs received the speed previously provided by the cabin’s perk.

Comment: changes in the perk and parameters are aimed at “unlinking” the cabin from a single type of movement parts and bringing its characteristics closer to other medium cabins.

Comment: the perk of “Oppressor” had too much effect on heavy weapons, making many such builds the ultimate choice in battles.
We understand that these changes will affect heavy weapons, but now they will be much more effective on light vehicle builds. The following change will balance this superiority, after which it will be possible to additionally increase the effectiveness of those parts that will require it.

Comment: the weapon continues to show overestimated efficiency in battles at 6000-8000 PS range. The change is intended to make the gameplay with the “Caucasus” more complex, encouraging you to think about the positioning of the vehicle in battle.

Comment: the perk’s enhancement is intended to increase the popularity of the “Ghost”.

Comment: the change is intended to reduce the excessive effectiveness of cars with hovers at high power score levels. Now you have to find a compromise for them — either mount more hovers, reducing manoeuvrability, or remove some armour, reducing their survivability. Lowering the altitude should make it easier for owners of surface movement parts to play against cars on hovers.

Comment: a reinforced module will perform its tasks better and will effectively clear the area around the player from mines and flying projectiles.

Comment: considering the effectiveness of this movement part, the power score level of “Omni” was too high.

The perk now stacks if the speed of the vehicle doesn’t exceed 15 km/h.

Comment: the perk of “Tsunami” was almost impossible to use on armoured cars with hovers. The change is designed to both correct this situation and simplify the use of the weapon in other types of builds.

Comment: the module wasn’t very popular and showed low effectiveness when compared to “Omamori”. Reducing the durability of the shield and increasing the penalty to the active time of other “Aegis-Prime” modules will compensate for the decrease in energy.

The effect of mass on acceleration increased by 17%.

Now the epicenter of the explosion is shifted according to the parts hit by bullet damage (the shells now have a penetration mechanic similar to the shells of “Tsunami” and “Typhoon”).

Comment: the low effectiveness of the weapon at high PS levels was largely due to the “screen” armour. Penetration mechanics, similar to the one that cannons have, will solve this issue.

Comment: The main change here is that when hit, the enemy now takes contact melee damage — the same as from a disk stuck in the surface. This means that now the disk doesn’t fly through penetrable parts, but at the same time its damage is reduced by parts with resistance to melee damage.
Damage to frames was additionally reduced in order to prevent the weapon from being too effective when hitting frames.
The rest of the changes are aimed at improving the overall effectiveness of the weapon.

Now the epicenter of the explosion is shifted according to the parts hit by bullet damage (the shells now have a penetration mechanic similar to the shells of “Tsunami” and “Typhoon”).

Comment: previously, these parts, because of their excessive parameters, were used as full-fledged armour, although the decoration shouldn’t perform this function.

Especially when you see the armoured vehicles you can use in the new brawl
Ice cream truck, police car, garbage trunk, etc

At least it’s not just a

I’ll be sitting this one out. I was looking forward to being able to get my hands on some fused items and cool paints in exchange for grinding for some lighters. But nope, I gotta pay $10 in order to even half-way enjoy this mini-season. Thanks but no thanks. Hoping the Christmas event will be better.

Is there a list of what items we can get with lighters?

Im cool with changing specs on parts n that. Im not cool with the weapons lock that has no purpose for us that have a brain and can aim while they move or a rearview that has no use to those of us that know how to read a map. Thanks for giving me a reason on Thanksgiving to quit playin the game, way to lose another player that has been here since the start.

Nope, I don’t see anything in game and they make no mention of that in their update release notes.
I’m guessing you may have to buy the BP for it to show that information, I don’t know as I haven’t bought the BP yet.
If that’s the case then people just continue to call 'em greedy and more will, even the forum mods don’t deny it

Last time Charlie asked what my problem was with XO, I typed 2 pages on its economic model, never got so many upvotes lol.

We saw the items in the ru-only stream. I think there was a Beholder and some Hermit wheels, but that’s all I can remember.

I would really like to see a list before I spend the money. If there’s a good selection of stuff, I’ll go for it, but not if it’s just items I already have.

I’m sitting this one out. Slim rewards, and a crafting table locked behind a paywall… No thanks…

The event, well…there are a lot of rewards for people who do not buy the battle pass which is nice, and the parts you get with your 10 eurodollars are laughable at best, with the main idea being that you can grind the lighters and get a fused neat epic or legendary maybe offering someone an item they for soem weird reason want to pay 10 moneys for, but…

The event itself sucks, or it would be a lot of fun were it not for the wonky car strafing mechanics or the fixed angle miniguns. It’s just a pain in the butt to play, let alone grind for anyone. Once again they try to reinvent the wheel and end up with a square wheel. The upgrade you get for the gun (lasers replacing stock miniguns) is a downgrade rather than an upgrade. Booster is near useless because it does not have enough kick to properly boost. Strafing just launches you left or right in an almost random manner.

I am still going to enjoy the free stuff I get, but I definitely won’t be playing this mode for any “fun” it’s supposed to offer outside dailies or weeklys.

I love the idea they had and the overall theme but the execution leaves so much more to be desired and the idea of having to actually play this event to grind out something from it just puts me off. Another pay to grind mini battlepass with the thing you’re supposed to play a lot being the most unfun it can be, kind of like the latest steel championship was, the event itself you’re supposed to play was completely butchered. Who even designs these?

Is there a list of what items we can get with lighters? 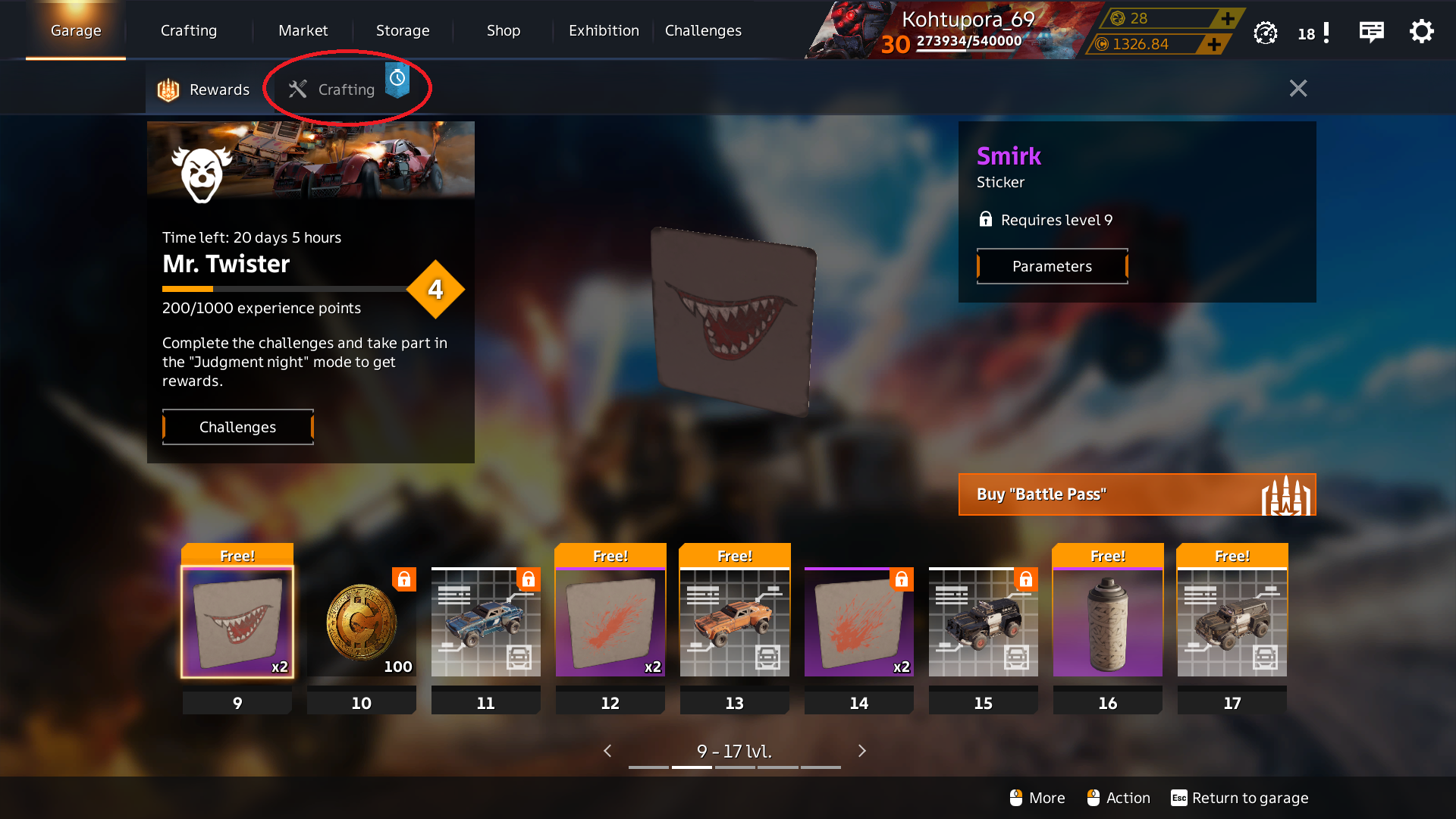 I meant the crafting table, where we can trade “lighters” for parts (if we buy the Battlepass)

Those are the parts, you need to click the thing that’s been circled in red

I am still going to enjoy the free stuff I get, but I definitely won’t be playing this mode for any “fun” it’s supposed to offer outside dailies or weeklys.

I thought about doing that too but then I was like why should I contribute time in an event for them to put up more paywalls like that.

Yeah, but I can’t click that link in a screenshot, and I’m at work so can’t check the actual game.
I’m assuming the crafting items aren’t just cosmetic stuff, right?

Thanks!
Wish that list was more exciting. Most of the good things on there I already own.
Can we use these items for crafting? Some are ingredients for other items I want, so it might still be worth it to me. And I do miss playing Stillwinds, so I might grab some of those.

They are all upgraded items.

Thanks again!
This may turn out to be the first BP I’ve skipped. Then again, I didn’t buy the Catalina pack, so maybe I deserve a treat?

You need to buy the BP and get to lvl 36 and above to earn the resource lighters, to craft all parts you only need the lighters, but to get them you need to complete the BP levels, then after that the parts like Stillwind need close to 500 lighters, while the paints need 25 lighters and up, only thing I be interested in crafting is the yellow paint for 25 lighters as it’s the only paint I don’t have and don’t see myself getting to lvl 36 plus even if I buy the BP