So after my previous rant post I had an idea about giving porcs a perk to correctly balance them across a range of powerscores rather than just making them 4 energy, which let’s be real, will screw over those who have builds or own 5 of them; which I’d rather not happen, because I don’t wish that on anyone.

Currently porcs overperform at lower powerscores exponentially… 1 barrel or so is usually enough to cripple a large portion of builds under 8k for example. Due to this I think making the weapon damage increase via the overall powerscore of the vehicle it’s being used on.

At the moment a single porc barrel does 160 in straight impact damage, with a 4 second reload, so that’s 320 or 480 instant damage per shot with 2 or 3 without even taking explosive radius and the subsequent damage into account. This is before any cabin or module buffs.

Lets say we use this as a base for a 10,000PS bracket. If porcs would do a base damage of 40 instead of 160 but the perk would be ‘Weapon damage increased by 2% for every 100PS increase in vehicle total powerscore’. Then at 10,000PS porcs would do the same damage they do now, while having a reduced damage output at lower PS’s where they usually insta-gib almost everything.

You see where I’m going? I feel like it makes so much sense, and if the weapon has way too high a damage output, like using 4 at 20,000PS making it increase by 400%, doing 320 per porc then simply lowering the base damage would solve this problem, or altering the % increase.

The only negative would be that lower PS builds with porcs wouldn’t be as powerful, therefore removing them from being viable which they really shouldn’t be as low as 5K PS etc. At worst it would make them slightly more powerful at the highest of PS, but at that PS there’s so much armour, hovers and stuff anyway that negate their inherent OP nature that lower PS simply cannot provide.

PS. I do know this isn’t how %'s work exactly but it’s how Crossout uses them I’m pretty sure, and explains what I’m trying to say the best. I really don’t see a negative here, unless you want porcs at lower PS to be as powerful as they are now

Thoughts? maybe I can’t see any unforeseen negatives, so enlighten me if needed

I am against taking relics into low power scores. I think Porcs are second only to Jorgunmandrs for obnoxiousness against new players. However, Porcs aren’t balanced on how they stack up against your average Borer build, but against Clan Wars. Porcs are not overpowered or even the best relic in Clan Wars.

There is a simple solution that will solve all problems: Double the powerscore of Porcs.

But, there is a reason that this isn’t done. Porcs are allowed in low power scores to make new players covet a Porcupine or 5. The flex is part of the game and the pay to win model. To put it another way, the low power scores are not meant to be a comfortable contented place for a new player to stay, or the company wouldn’t make any money.

I just wrote something similar 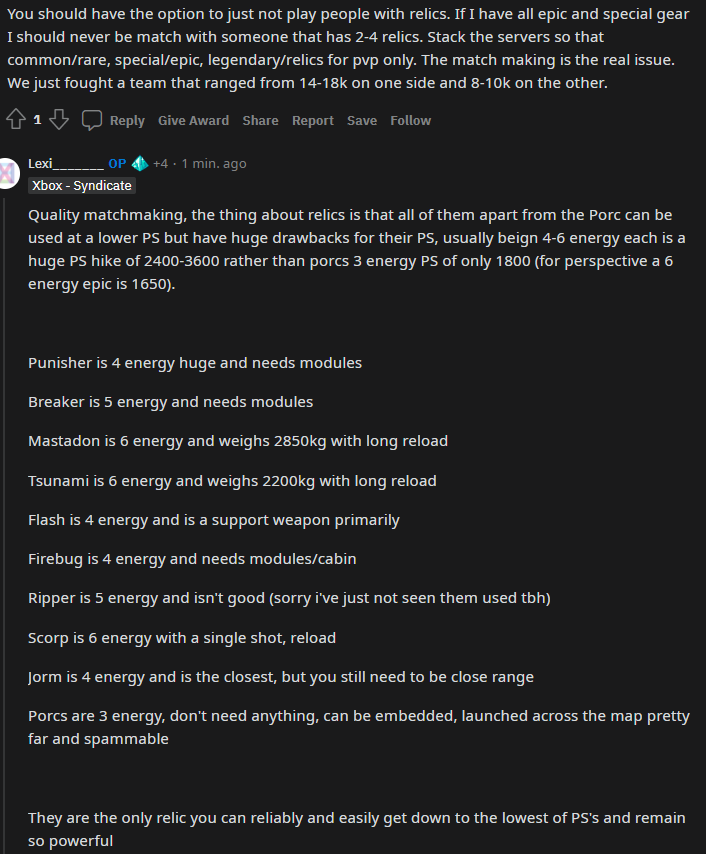 To put it another way, the low power scores are not meant to be a comfortable contented place for a new player to stay, or the company wouldn’t make any money.

It does suck, after the devs recently said:

Yet will allow porcs to slaughter this PS range

Yet will allow porcs to slaughter this PS range

Agreed. Another point is, that Porcs slaughter new players, but do not slaughter old players at low power scores. That’s because the most obnoxious builds you can make at the 6-7 k mark aren’t relics but fused builds. For example, at last years’ Christmas brawl, which had a cap of 8k, the top player on Xbox had the following build:

For this same event, I didn’t bring Porcs, I brought my fused Pyralids.

This build, or the 4 Sinus Nova variant, crushes 6-7 K much worse than a few Porcupines, but is equally out of reach of new players.

Porcs are fine as is.

::snickers:: Wow… you can’t handle the most counterable relic in the game.
Try practicing in patrol before you make suggestions sweetie. Most people can just ya know… dodge the porcs.

I have an idea to balance them

OH WAIT! All of this stuff is already like that

Lol, just get good. Porcs are fine as is.

I firmly believe that low PS balance issues should be dealt with by increasing the PS of the item (except in cases where the item is also unbalanced at mid/high PS).

I’m going to have to agree with this.

The so called “hard line” in the sand about how PS works on some items but not on others is dumb.

Small PS changes could make the world of difference without making the weapon useless.

Does that truly come in under 8k PS?

It looked like a skeleton, but I saw it last Christmas. Was that an 8k league or 9k league?

It was a 9k league

Just make them 4 energy and watch all the crutchmasters get mad. Low effort weapons shouldn’t be high reward weapons, simple as.

Just make them 4 energy and watch all the crutchmasters get mad. Low effort weapons shouldn’t be high reward weapons, simple as.

by your logic then

-make breakers go from 5 energy to 6…

we only have a singular weapon that turns 0 degrees left and right, zero degrees up and down (and is not a fixed land-mine or drone) the porcupine

it is extremelly hard to balance the porcupine due to how unique it is, as there is no other weapon that works the same way as it, so there is nothing to “compare” to it…

porcupine is one of the worst relics in the game, all other relics in a “good” player will easylly beat a porcupine player for the mere fact that the porcupine can not “aim” for weapons

not only that, we have TONS of things that instantly make the porcupine useless just for being used, and the list just keeps expanding over and over again…

porcupines have the same inertia as your vehicle at the time they were deployed, turning your vehicle while launching them auters their trajetory a lot…

the only places porcupine is “good” is at raids, in low PS it is only “decent” because most people there for some reason do not know that you can move around the barrels without hitting them…

I’ve wanted Devs to just raise some weapons ps for so long. Like with the parser. I loved that guns range. Now I’m just sad about it.

Breakers should have 6 energy and slower overheating for sure. It would be consistent with shotguns getting bigger energy demand with rarity, would prevent Breakers with Flash. Would bump their PS up and keep tham away fom 10-11K lobbies, but still keep them as a strong CW option. Using Breakers well still takes far greater effort than it takes to spam porcuckpines. Only relic that might be considered taking less skill than a Porcuckpine is the Flash, but the Flash only performs well as a crutch to Firebugs… and Porcuckpines.
Speaking of Flash, got no problem with Flash being 5 energy, screw that debuff crutch. Make Firebug 5 energy too.

You claim that Porcuckpine is one of the worst relics, but a triple porc at 9+1 energy in weapons still makes for a full CW meta build. That is definitely not how things would work if it was actually even remotely bad. The only other weapon with the same energy profile is the Firebug, nothing else leaves you with so much energy left for various other pieces of equipment. Meaning that the porc can just drop 4 cuckpkans to catch an enemy and then deal thousands of points of damage for free. And since it can be so easily spammed at great amounts, or you can just slap it on a hover or a bigram build, you can simply aim it by turning your build, that is a slight drawback but it does not make it weak.

Mind you, if they were made 4 energy, they would still be as strong as they are now, but they would have fewer energy to run cuckpkans of Flash, and they would be kept away from PS levels where they get free kills by blowing up GasGens with zero effort and are simply abusing ill-equipped players. And they would still be the GOAT option for most raids.

Raising energy breaks a lot of builds, but raising PS breaks no builds except for the worst seal clubbers.

Where? in RUST? Are you frelling kidding me? Full CW build on what planet?

Also… breakers… 6 energy… you mean the single weakest pound for pound shotgun in the game at the moment?

Please stop speaking until you’ve played the game enough to have an idea what’s going on. I checked your old forum post count vs. your match count long ago and you had more forum posts than matches played and that -has not- changed Lemmy.

What I do find most fascinating is that while you complain of meta this and that and chasing this and that… you possess most of the things you complain about and run really bad exhibition copies of meta builds… or art builds.

I have to consider the source here of your… opinions… I think everyone else should as well.

I think the porcupine is a balanced weapon, it is already the strongest of almost all the relics weapons in the low ps, and has the right strength