the game states the following : 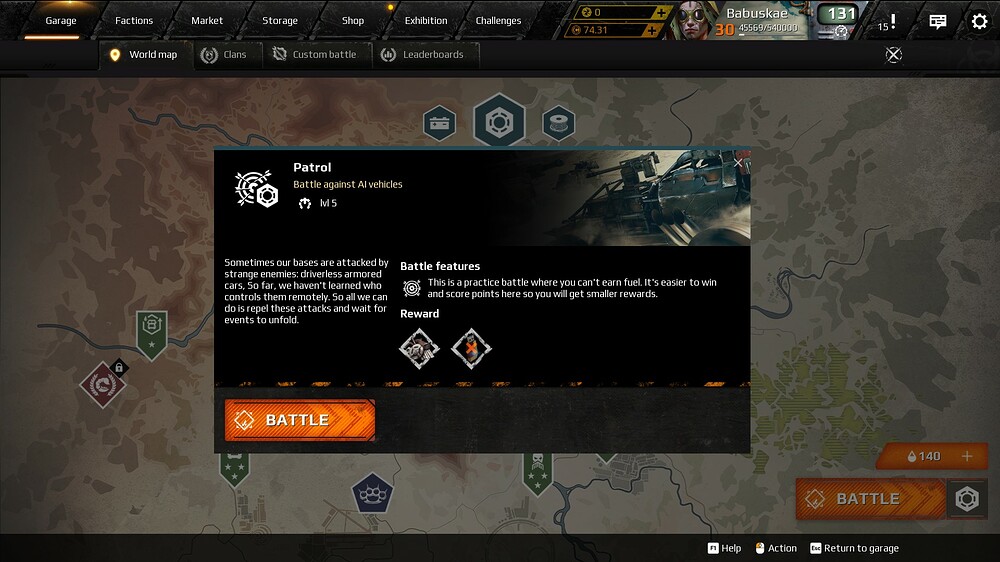 Ok, so far, so good, fair enough.
But then you click the button and things are not that strait forward.
Practice battle, right…
you end up facing type of weapons that outclass everything you have (retchers, fortunes, porks and so on…)
and stepping aside the upcoming and predictable comments about PS being too high for the build in question, being me the problem, build quality and so on.
Let me emphasize, practice battle, lower rewards.
From my experience, past experiences, if you don’t get above 95 % WR in PVE then probably it’s you. It’s that easy. it’s so much easier than it became boring
I don’t know the correct numbers but in Patrol those numbers must take a steep dive because it’s not a defeat once in a blue moon, it can reach several defeats in a single game session.
entire teams wiped out by bots.
which lead me thinking or they could raise the rewards in PVE or they could limit certain weapons in the bot side…take it down a few notches
and let me preventively argue against …
But if it is a practice run you must practice against retchers and alike. type of argument.

After a certain point, you can’t really armour up to take that kind of abuse, after a certain point there’s really no difference between what parts you use as armour or anything, you encounter one of those things and you are dead, simple a that.

Because the AI have a really dumb aimbot that will hit you over cover, as you come around corners and across the map, that combines with such weapons will probably do this. It’s the same reason the dual cyclone bot can ruin people in pvp as it just completely aimbots people, if bots had scorps etc it would be chaos, the old triple executioner bot used to pull dumb shots across the map, really dumb stuff

theres no such thing as “practice against a AI with RETCHERS that have PINPOINT ACCURACY”. seriously once these things lock onto you its literally a few seconds before your dead and all your weapons are gone.

idk, use a cloak, works for me

Patrol is super easy though.

Can we see a picture of your build?

The higher the PS, the more dangerous the bots become, because they not only have more devastating weapons, but the PS advantage they get also becomes larger. At 10K you might meet 14K bots on a regular basis, and they WILL wipe the floor with a crap team. At 6K, a near 100% WR is easily achievable. Anything below 6K is a joke.

Still, as far as scrap goes, the reward/time ratio is almost as good as PvP battles, even if SHTF every once in a while and you lose some battles. The only downside is that you can’t get fuel, but then again, what is the ratio of won and survived games in PvP? I don’t think PvE needs any change, it has the perfect balance of risk/reward on higher PS, and it’s laughably easy on lower PS.

why see a picture when you can ride in it.
type stubby lill dork or my name in the exihb

( most probably you already saw it, in the other topic)

Yea, here is Abigale mopping the floor with her tripple porcupines. 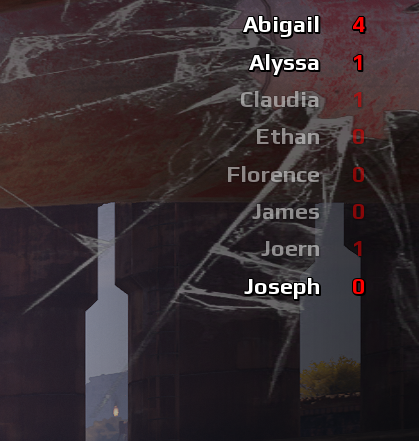 She looks at you and bam!

I bet the devs are well aware of these stats - builds like Abigale routinely net ~4 kills a game across sizable sample spaces. The moment she is put into the OPFor roster the game for the human players is likely lost.

Which clearly, doesnt correspond to the description for the game mode.

Reward does not depend on PS.
Patrol, on 3-5k PS is rewarding as much Scrap as average loosing missions.
So

There are only 2 reasons I know of to play patrol

or simply to chill out without to much fuzz, to try new things, or to make necessary tweaks to the build.
Here some more reasons to play patrol.

I’m not complaining about rewards in Patrol…as long Patrol is what it says in the “tin” which is
a practice battle easier to win with lower rewards.
But when you are facing retchers, porks, scorps, and whatnot in PVE, yeah, i think rewards should be higher.
the bottom line is, for PVE :
Or “softer” bots
or higher rewards

But when you are facing retchers, porks, scorps, and whatnot in PVE, yeah, i think rewards should be higher.

The bots even with those weapons are super easy to kill. Most of the time when I do a patrol to finish a BP challenge I stand in one spot and just let them shoot me while I kill them all. No tactics, just killem.

It has to be that your build is not good enough for the PS bracket your trying to play in.

Again, please post a screenshot of your build.
I’m sure that will clear this up for everyone on all 3 platforms.

@ RoughMonkey
You are playing some other imaginary Patrol and this thread doesn’t pertain to that. The game’s Patrol that we are discussing here routinely has its bots mop the floor with the player teams. Hence the appeal to the devs to either up the rewards or restrict super premium weapons the bots spot, since this mod is nowhere near what the description says it is.

what PS’s are you talking about then? i’ll see what i can record and see if i can get some clips to show the use of cloak etc

@Xbox_M_420
The point is not to have a victory. These come about. The point is how hard that victory to obtain is.

Here is a screenshot of PS that the game features:

im running near 11k PS rn and its being a breeze, not even worth recording anything yet, will show screenshots and clip if needed, so far i only died cos i was being lazy and got mandraked, i have like 500hp…

This is also my experience with patrol, it is super easy. In all honesty I think the bots in Patrol need to be smarter. They just clump up half the time and it’s like killing fish in a barrel.

Again, to the people having trouble, please post a picture of your build. I’m going to have to guess by the refusal to do so that you already know what the issue is.

Just did 10 patrols at 11k, got a few 17k lobbies and a couple 9k for reference, this is how most looked… 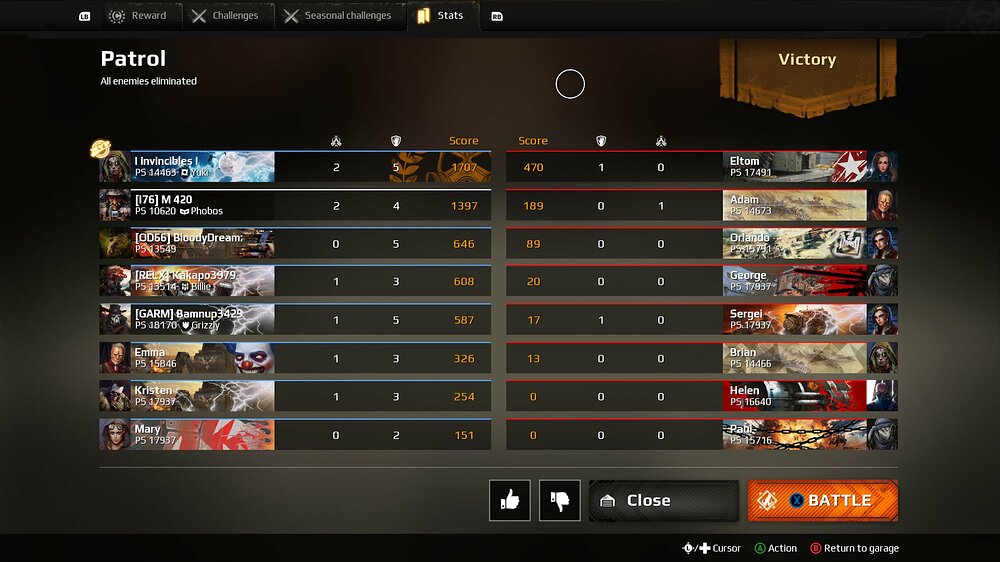 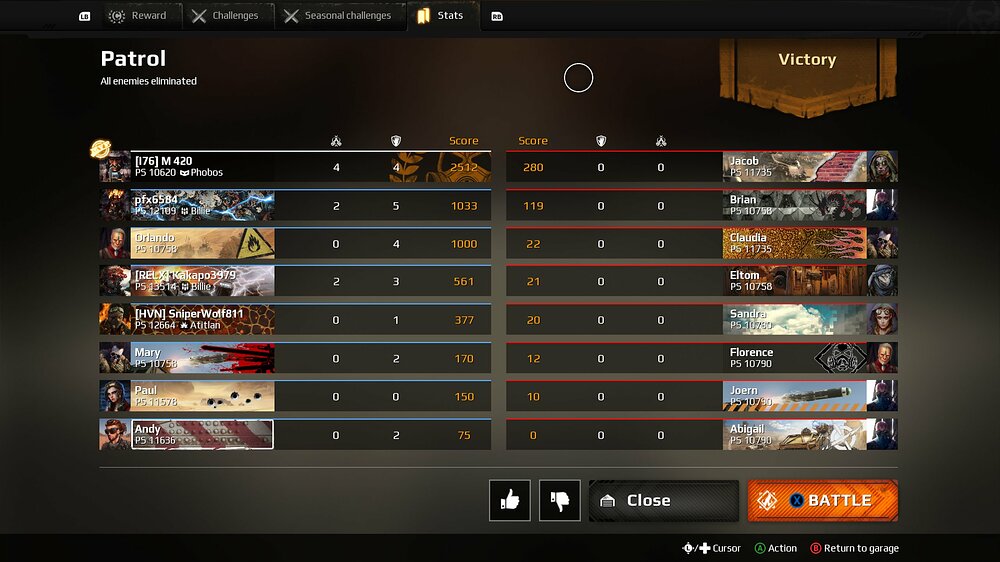 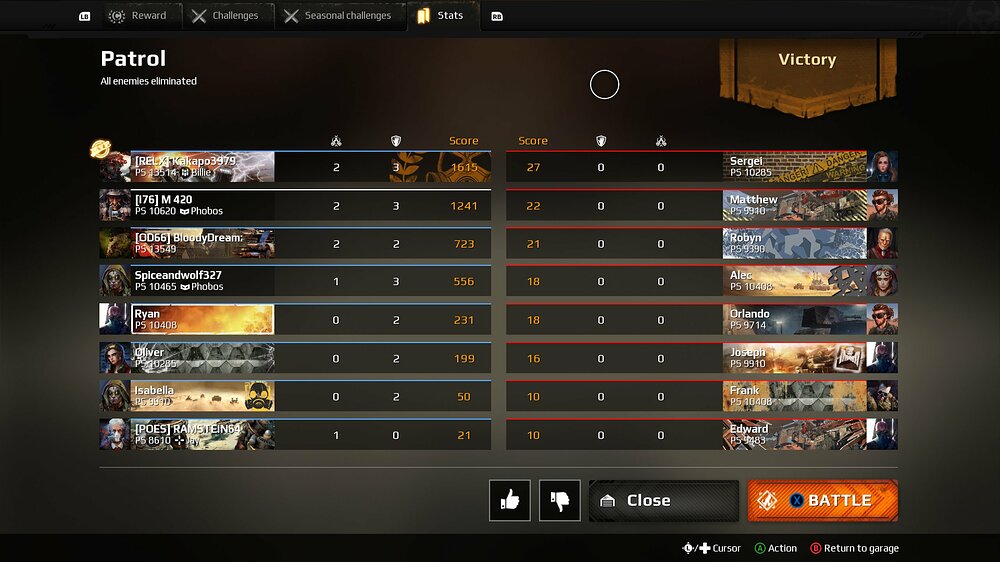 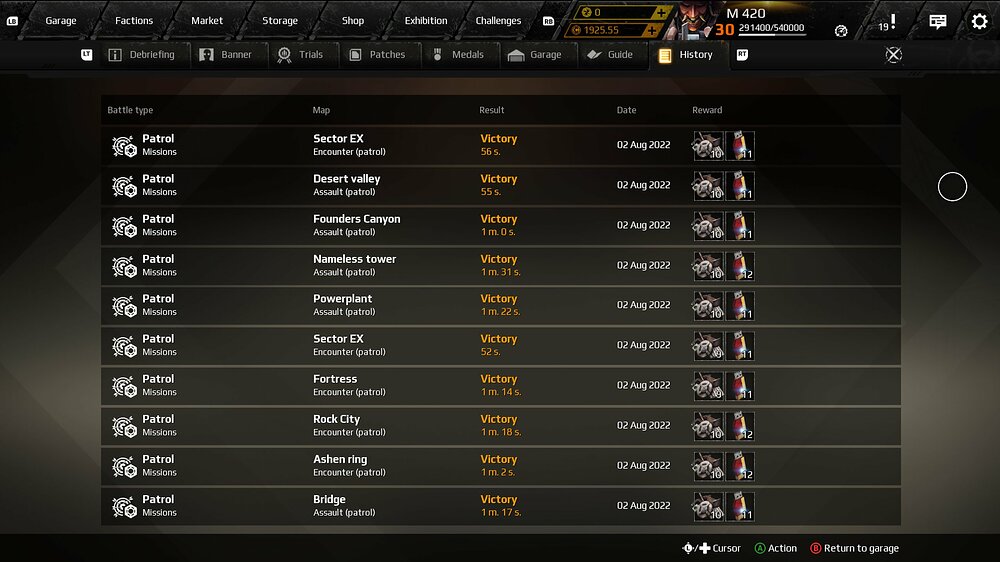 Just did 10 patrols at 11k, got a few 17k lobbies and a couple 9k for reference, this is how most looked…

This is also my experience with patrol.

With 1min wins, I think that the rewards are pretty good.

My advice to the OP would be to start playing PvP missions, then they might realize that patrol is super simple in comparison.

If you cloak you can do stuff like this

bots just turn away from you unless already damaging, and unlocking you already

@Xbox_M_420 thanks for posting these.

Now, this is interesting. Your screenshots show that the player teams deal same damage as what I see in my Patrol games.

But the bots in your Patrol games are completely inept. So, we might be discussing two completely different experiences where for some reason one group of players gets these killer ass mofos and another deals a high school softball team.