Let’s discuss the new parts, haven’t gotten around to testing the wheels properly and played around with the crossbow just a little before something came up, but my initial impressions are positive

At first glance the damage might seem lacking per shot, but it starts to add up real quick when you get into the tempo of shooting it. Two of them seem to perform really well and rather than being a frail fast paced dps weapon it has nice hp, at the trade off of not firing as fast as you might expect a dps crossbow to shoot at. And the accuracy is super nice. Still need to properly play with them but currently I feel like I’ll love it

I don’t know if it’s the weird new forum or me, but I can’t find the post with the exact info about the event OR the items.
Any chance a screen of the stats of the Crossbow? I’m at work and really curious what’s it like.

Here are the stats, took me a while since I was on the road 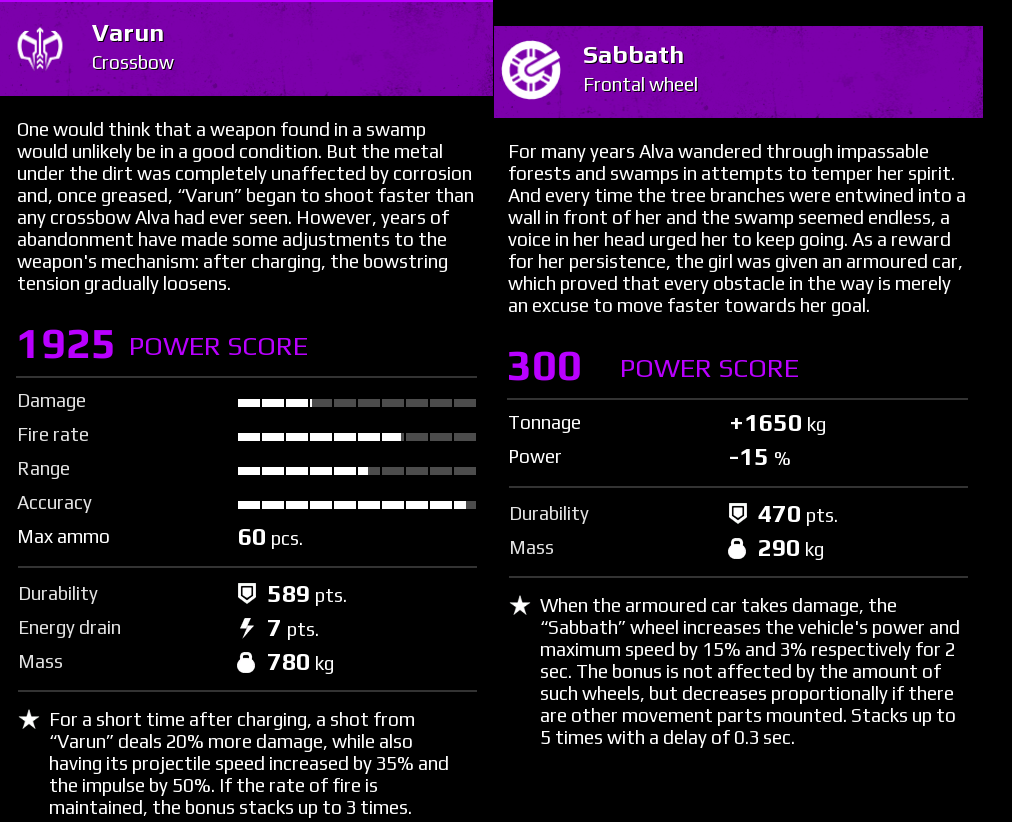 Also a neat thing is that you don’t have to hit anything with it to keep up the charge, so you can miss your shots and still have the max boost on your gun as long as you keep steadily firing it

At least with the Spike you can just come and instant shot, sometimes it’s a critical hit and the enemy die. But with Varun it’s low damage so you have to keep landing the arrows, wich can be very hard with a moving target.

So far it feels good, but I have to wait a little to see how well it does once the usual 1-2 days after update general lagginess disappears and I can hopefully use them a bit better and not break my chain of shots due to lag spikes.

That and these suffer from the general charge weapon input lag when firing charged shots repeatedly that I seem to get with all such weapons, Assemblers and Summators/Arguments for example, but with the Varun just getting the timing wrong once messed up the chain of shots and you’re left with eventually completely messing up your shots because stuff that happens on screen does not match what you’re doing with clicking and holding the mouse button down. Kind of like how you’re trying to shoot charged shots repeatedly with an Assembler and at some point it just messes up and starts to register some of your button holds as just taps and instead of charging, fires uncharged shots every now and then, making you have to stop your streak of firing and let the game sorta catch up. And how you sometimes shoot a single shot of nails in between trying to shoot charged nail volleys with the nail guns, even though your rhythm has not changed

But with Varum the window of keeping your weapon boosted is so low that even the slightest little server lag at the worst possible time can just mysteriously disable your weapons from doing any damage as you’re holding your button while the game thinks you’re not firing at all, or the max damage as you stopped your firing streak for a few seconds as you have to stop shooting and start the chain of firing all over again.

Here are the stats, took me a while since I was on the road

Thank you very much!

I don’t like the crossbow… What I gather is it has no (or low) impulse on hit. You know, the staple of crossbows in XO (even Phoenix should have impulse)…

I don’t think I will be getting this one.

What I gather is it has no (or low) impulse on hit. You know, the staple of crossbows in XO (even Phoenix should have impulse)

Yeah the impulse is pretty nonexistent, even after the boost is in full effect. I’d say a Whirl has more impulse than this. At best you start to somewhat impulse enemies after firing at them for a while as they now have barely any parts and are basically just a cabin and a few frames and maybe a wheel or two, but if you’re looking at any kind of impulse from these you have to have two, 1 simply is not enough

Using 2 on a non-reload affecting cabin and with a flywheel, I got around 2700 damage from the damage counting ring. But if nothing else, feels like that these do not profit that much from reload boosting cabins (tested with deadman and hadron) so you can use some other cabin and just a flywheel pretty well rather than having to put all the focus onto reload/charge boosting with the cabin + modules, a single flywheel will work just fine

if you’re looking at any kind of impulse from these you have to have two, 1 simply is not enough

Well yea, Spikes are the same… Does that mean it has the impulse of Spike or lower? Because anything lower is … just too low. Even Spike’s impulse is bad, and that’s with the impulse fusing.

Using 2 on a non-reload affecting cabin and with a flywheel, I got around 2700 damage from the damage counting ring.

My dream is having a Relic version of Spike with the size, durability, energy cost of Varun and the impulse of Toadfish

Well yea, Spikes are the same… Does that mean it has the impulse of Spike or lower? Because anything lower is … just too low. Even Spike’s impulse is bad, and that’s with the impulse fusing.

I’d say Spike has more impulse than this, at least if comparing 3 spikes vs 2 varuns. 2 varuns might have more impulse once both guns reach the full boost though

repeatedly shooting, the sphere that counts damage only for a set time when you start shooting at it before the count stopping and resetting itself. I think a singe shot damage on a single varun is around 144 in damage, I remember cabin shots doing that much when test driving

My dream is having a Relic version of Spike with the size, durability, energy cost of Varun and the impulse of Toadfish

A legendary Phoenix would be nice, with the accuracy of a Spike, and the explosion being more impulse delivering rather than a traditional explosion. Imagine you shoot it onto the side of an enemy build, and then once the “explosion” happens it’ll deal damage normally to the part where it attached, and impulse like you just got toadfished to that spot

144 in damage, I remember cabin shots doing that much when test driving

I got around 2700 damage from the damage counting ring

With little to no impulse and 14 energy consuming (which requires the bare minimum of having Bootstrap or Gasgen). One has to shoot continuously, in order to keep the bonus.

At least it deals no damage to your car, compared to Astra. But these aren’t good either. And their size is still the problem.

Yeah, skip this pack and buy them cheep in the market when it gets flooded by people that made the mistake of paying for it. 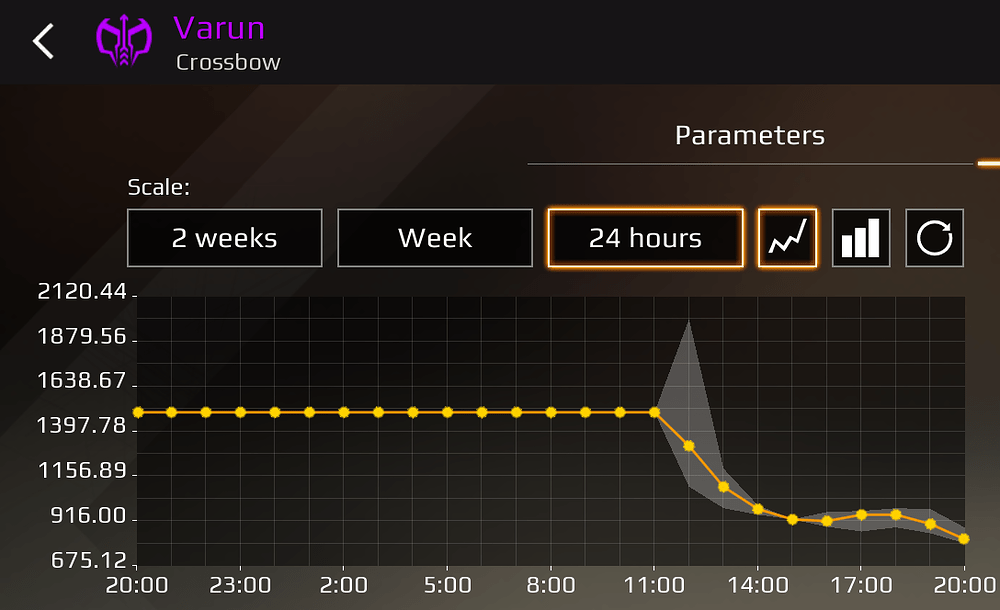 After proper testing my verdict is that it sucks, boils down to having too high of a powerscore and energy consumption for what you are getting. If you want to use only one of these, maybe you can do some seal clubbing at medium success in lower ps but it really screams to be played in a pair rather than just by itself.

But if you use two, it underperforms seriously against all the stuff it has to go against due to the ps bloat, and the only builds that seem to be able to make use of it are your basic sideways hovers that don’t need many parts outside the essentials, but those same builds can make a lot of guns work that otherwise would not work in a similar setup on wheels that’s basically just a few frames and movement parts, a cab, generator and guns with no armor or hp.

I don’t know if I just have fingers that cramp up or the matches are more laggy in general and input works with a delay, but I can’t keep firing this thing at a steady pace during matches for the life of me. Add to that sluggish bullet speed like on the Argument that feels like you could have hit your target if only the projectiles traveled just a hint faster, and a sluggish turn speed that really wants you to put an Oppressor onto your build, but being so power hungry that you can’t most of the time, makes it not perform in movement or while staying still.

I rate this Argument at release/10, wish I could sell them away but price corridors won’t let me lower the price enough

For me, what makes it extremely hard to use this weapon is this part of the perk: “…while also having its projectile speed increased by 35%…” So, you have to learn 3 projectile trajectory path to use the weapon from mid/long range, while constantly monitoring (or try to “feel”) which part of the stacked up bonus part you are currently in. Very hard, especially because it’s easy to loose the perk in combat situations (in the garage, it’s performing great

That wheel is going to be overpowered ASF if it doesn’t get nerfed. 470 dura are you kidding me, on a wheel that boosts power and speed by 65% and 15% respectively! This wheel is better than the Bigfoot, and its a frontal wheel so GFL dealing with wheel builds that have hover frame and spaced armor layouts.
Wheel powercreeps even the Hermits and Bigfoots.

The gun, I’m not too fond of. I like that it’s 7 energy though. I just don’t like it’s low dammage with high fire rate on the charged shot. I think it’s a Wierd sort of counter-productive combo

The wheels I think are very nice. I’ll keep a set for sure. The power increase is very noticeable. Maybe a lil op.

The wheels have like 3x the PS of the Hermits and are pretty heavy with quite a lot of power drain. The HP is a little too much perhaps, but I’ll need to test the perk itself in battles more. So far I’ve been preoccupied being a Big Racist in the Big Races.
The new structure parts are OP AF though, they have the HP density of the light bumpers, lol.