Where are all these players coming from?

On steam charts right now there is a 24 hour peak of 10.582 players, that is an insane new record for crossout. I play above 13k and only played the same players I’ve always played so where are they all too? 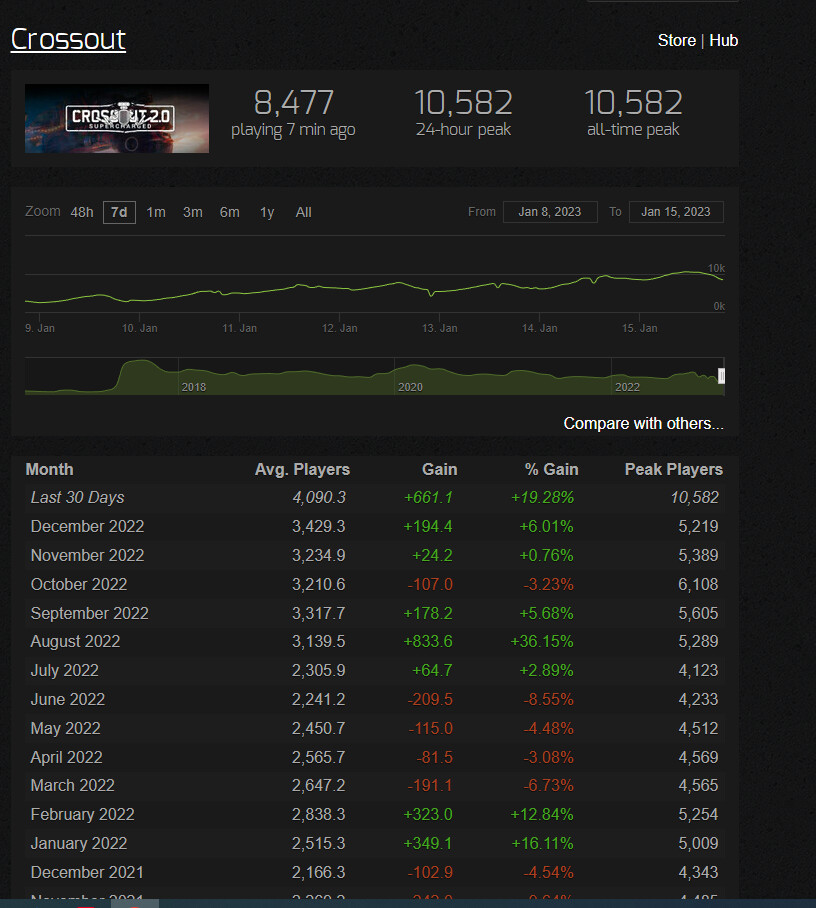 a truly beautiful sight to behold! dont you see, were witnessing the birth of thousands of new gajin accounts who will one day write a fake verified buyer review on steam.

That is a super abnormal number. The second highest month they had is when the game released in 2017 which was 9701 players then it quickly fell of a cliff right after and never recovered until now.

That is a super abnormal number.

Ya, it is. I can’t help but want to call BS on this. Is there any reasonable explanation for this absurd hike in Steam’s Crossout numbers? I heard they increased the number of servers in the UK, but without an intense advertising campaign, or a hugely popular event running I find this number hard to believe. The game actually sucks more than usual, IMO. I can’t think of any reason for the wildly ridiculous doubling of player population, other than it’s BS…or the previous accounting method was really wrong and these people have always been here.

Is there any reasonable explanation for this absurd hike in Steam’s Crossout numbers?

That is what I like to know. If they really do have more players than great, I figured you would see them first because you play low ps but I don’t and I am sure all these new players ain’t gonna just skip to 13k, 16k so I doubt that I will see them yet until next year lol if there really are any new players.

This may have NOTHING to do with it but, I announced in one of my Facebook groups that steam has a trading card system and, with the recent Magic: the Gathering backlash…we may have picked up a few people…but THOSE numbers…*shrug

I figured you would see them

I’ve seen these kinds of shenanigans when a company is talking to a bank. Twitter’s bots are pretty famous, but I’ve seen this kind of BS in my real life, too. If that’s the case they are either punching for a loan, or selling the farm, or both.

It’s shaping up to be a weird year already.

the previous accounting method was really wrong and these people have always been here.

That got to be the only possible explanation because the amount of new steam reviews are at a near all time low but yet the population is at an all time high, doesn’t make any sense. 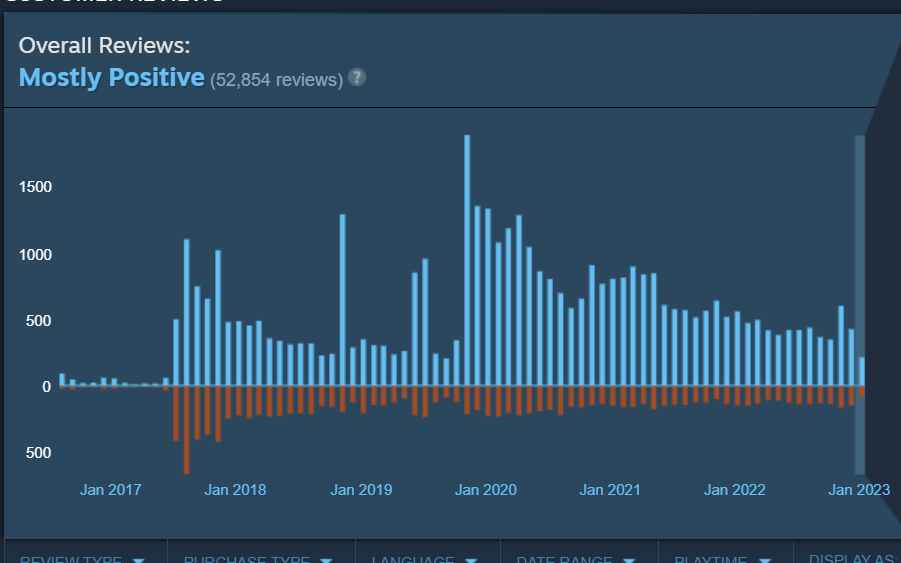 It says Steam’s peak players for today was over 10K.

An ongoing analysis of Steam's player numbers, seeing what's been played the most.

It’s never read a peak population that high, ever. Did they get hacked? Somethings up, because those numbers are way too far fetched. Maybe it’s a bug…ya, sure, that’s the ticket…or maybe we really have doubled in player population over night.

I hadn’t seen this promotional video on Steam before. It looks new, and it looks pretty darn sharp, IMO. If only the game was as cool as it looks in this video.

It’s possible Crossout caught some traction on Steam with this new update and improved marketing on Steam.
Well done, devs.

This one’s good too.

If it was due to steam marketing the number of reviews would be rising. Most of the steam reviews for crossout only got just a couple of hours play time so most people don’t play a game very long before deciding to leave a review. I’ve seen crossout reviews with like 5 minutes of playtime lol. I got to say I am totally baffled has to what is going on here.

200 coin reward for whoever can solve this mystery. If coin trading were allowed I seriously would lol.

one of those is the Facebook promo. And they’ve been real active there lately.

Well I hope so. It seems sudden though, but I’m not sure.

It’s unfortunate that the game is sort of a mess right now. I can’t say it’s running at peak performance, and I’ve seen it be a lot more fun than I’m having with it right now. I’m afraid all these new people will get a bad impression if this is their first experience.

They should hope to get that Battle Pass out and an event running to distract them with, before these numbers tank. If the game was left the way it is, which it won’t be, those numbers will descend back to the horrible depths they were before and have been for years.

I’m not convinced this is real though, but if it is, it must be only a Steam phenomenon, because I don’t get the impression there are significantly more people overall.

I will go investigate the reviews…or the lack thereof. I wonder what these new people think of the game, and I also wonder why they hadn’t tried it until now. This game’s been out for a while.

You can watch it

linking sethioz vids around me is just going to get you looked at like “you poor thing…” Jilted gamers aren’t to be trusted, they tend to have their own agenda.

i see they took my advice and made it snowing