Show us your builds

New forum means a new thread to show off your cars!
I haven’t been taking many photos lately, but here’s some video of my new Vulture/Yaoguai car. I was going for a junker sleeper muscle car kind of vibe.

What are you driving these days? 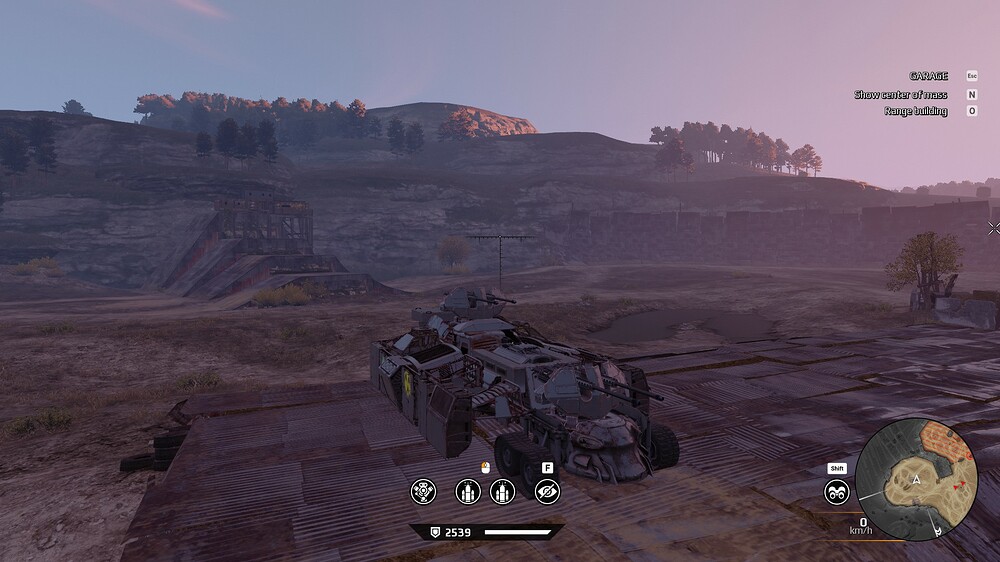 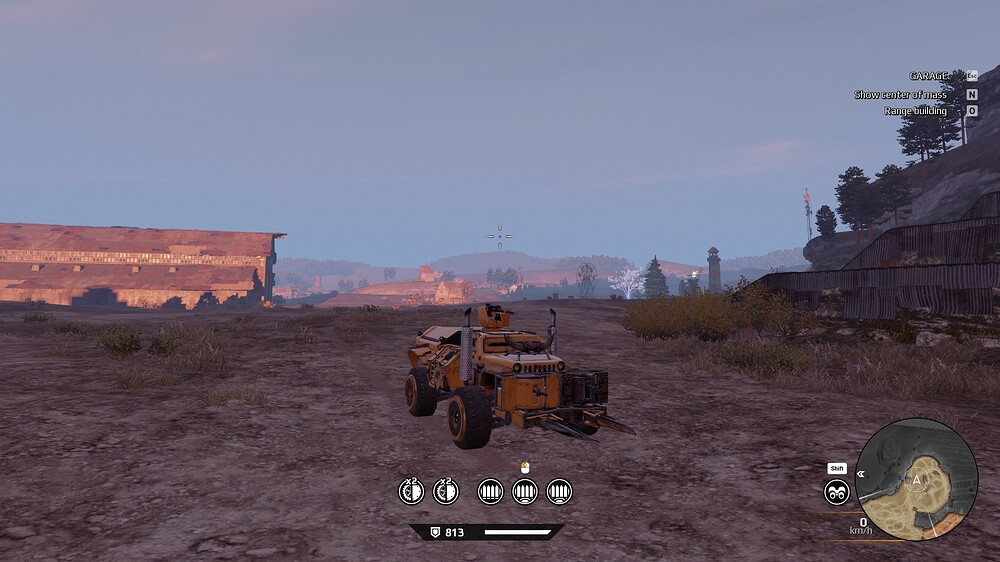 The second one is called the Grizzly: It slightly resembles a Yellow Truck my family had (also called Grizzly). I use it for easy Raids.

Gah stupid new forum calls me and new player and won’t let me post more than one pic per post.

I’ve been making a lot of different Hadron builds.

Here’s a 10k waltz art build I designed to resemble probius. I accidentally deleted my old design a while ago. This isn’t as good, but I still like Mecha Probius. 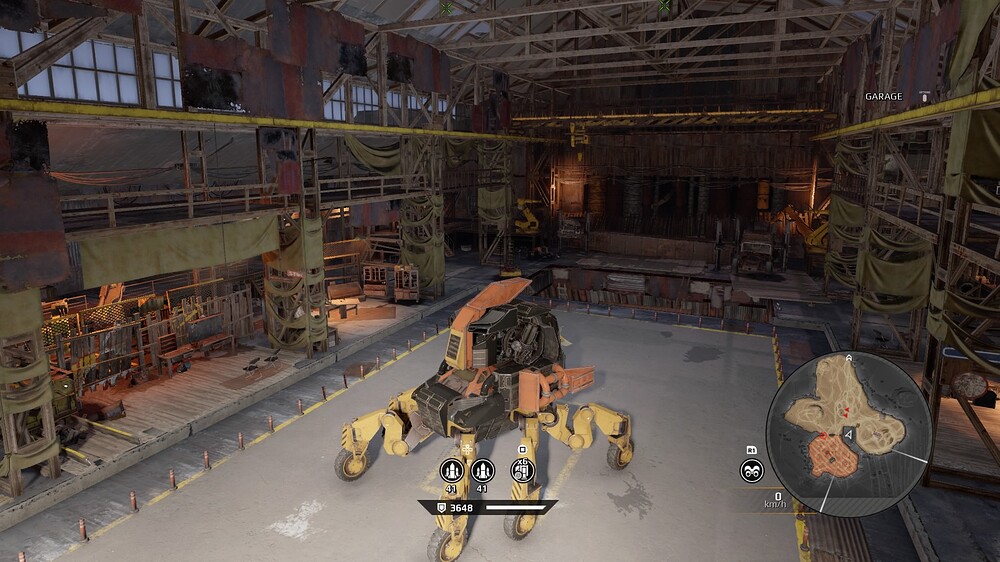 Here’s a little tiny aegis reaper. Not the kind of build you see everyday in the wasteland 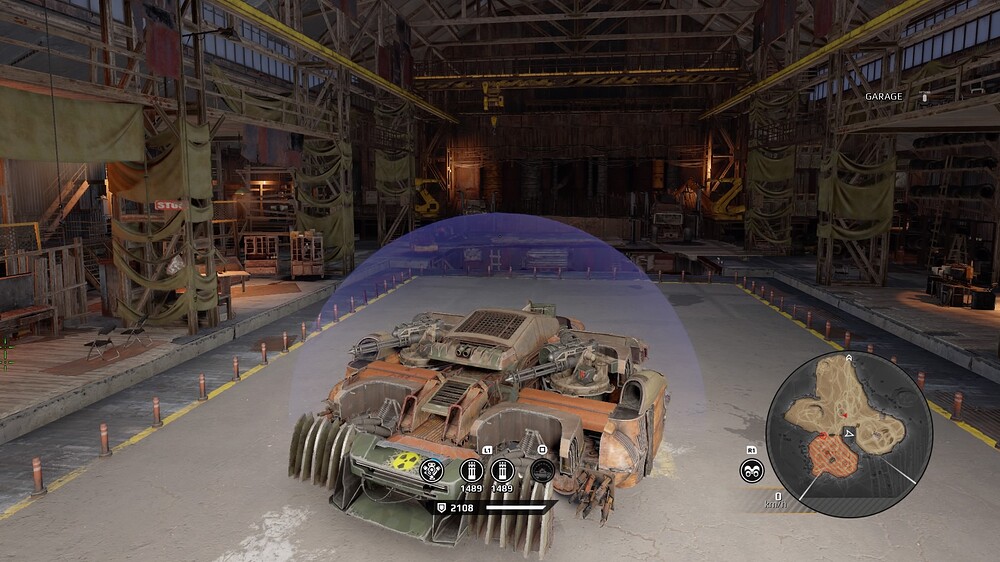 This is my build upon first creation, I dubbed “ugly Hadron” because it was very ugly. I’ve since armoured it to look a little better. Hadron def makes pairing porcs and fortunes together work much better than on any other cab. 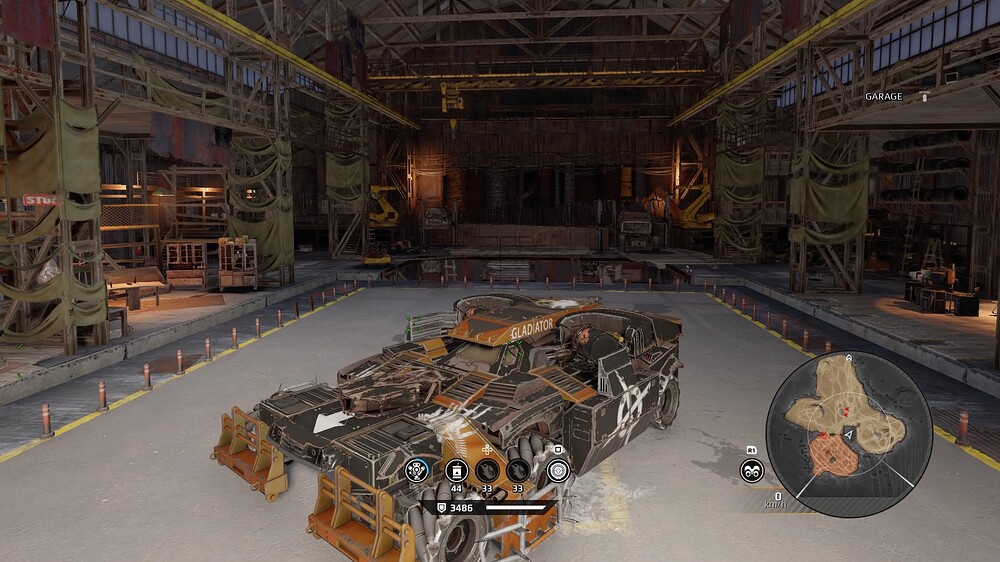 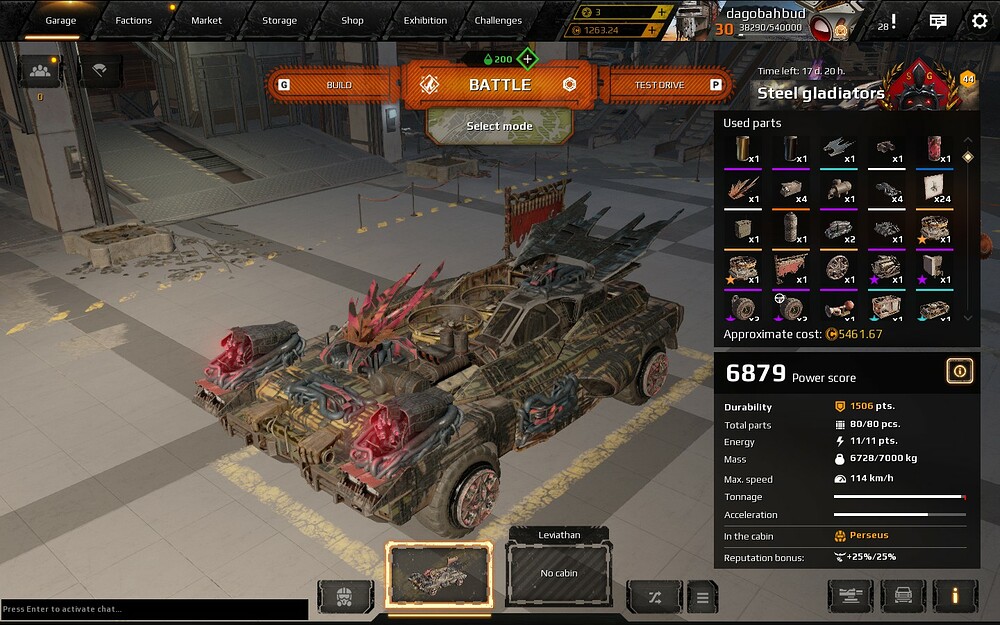 This is my Ravager baby ANNI. She is my favorite ride and gives me the most pleasure in Crossout. She is designed to to look like a Ravager vehicle and plays into the drone/robot/tech aspect of the game mythology surrounding the Ravagers. I found a build on the exhibition and heavily modified it. I infected it with that Ravager goodness. Covered her all over in the ravager paint and stickers (contagion) and tweaked some parts with a red glow compliment as seen on other Ravager vehicles.

She mainly is a support vehicle and works good with teaming on enemies with allies. The Allies distract from my drones above and the drones slow the enemies down for my team mates in the process. She can go 1 on 1 with a foe and win but it all depends mostly the enemies weapon/skill level.

She is ready to go to war and can take a good beating. She is a little heavy in the front with her armored pieces up there but its worth it when running against the enemy and plowing thru turrets!
With her added weight she isn’t the fastest off the block but she isn’t the slowest either and once going can move it move it.

I do get a bit of hate sometimes and what i think is russian cuss words aimed at me after a kill but i dont take this game or many things that seriously so im just here having fun.

Yeah its a point and click build but point and click builds are not guaranteed point and win builds at all in this game. I get killed all the time and its not easy at all. It takes a different set of skills to make these weps work but im just out here having fun. Its just a game after all right.

I hope you liked my vehicle showcase! 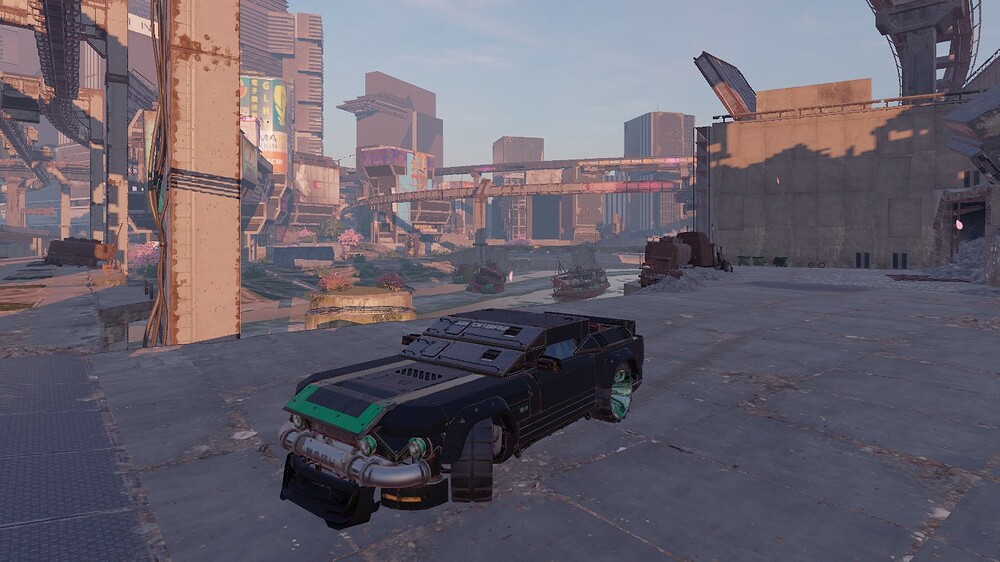 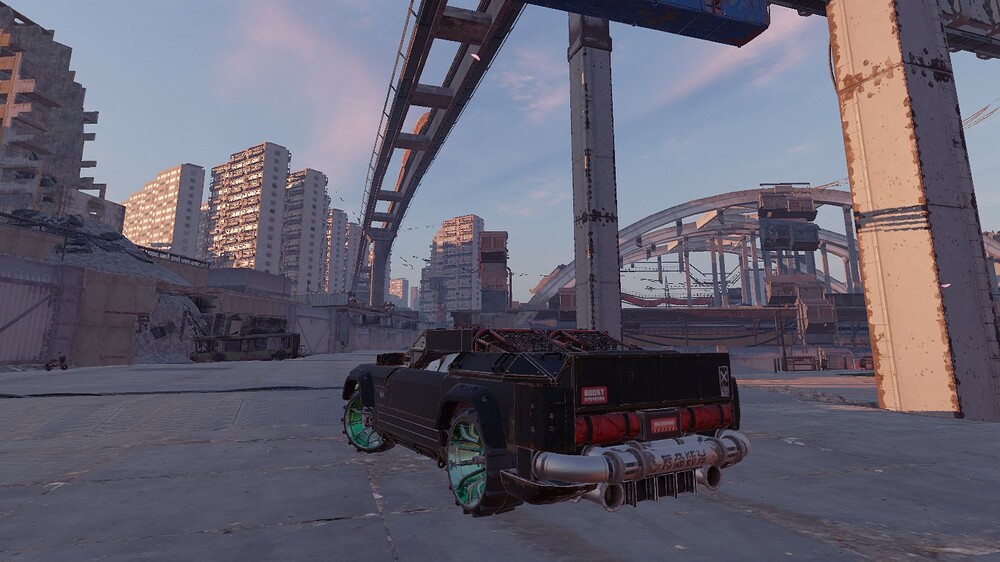 Thanks the super villian compliment is a good one.

Yes that past Ravager event was very cool…the same one with the in-game animation of the vehicle suspended up in the air on the new map being infected right? I really dug the event story and the Ravagers story in general.
I thought it would be cool to lean into it with a build and i think the drone angle adds to it.

Will be cool to see what you come up with for a Ravager build. I like the look of your anti-ravager build up there. Quite sporty looking. I myself still run a double parser build even after the nerf when i get tired of droning it. I like the parser. 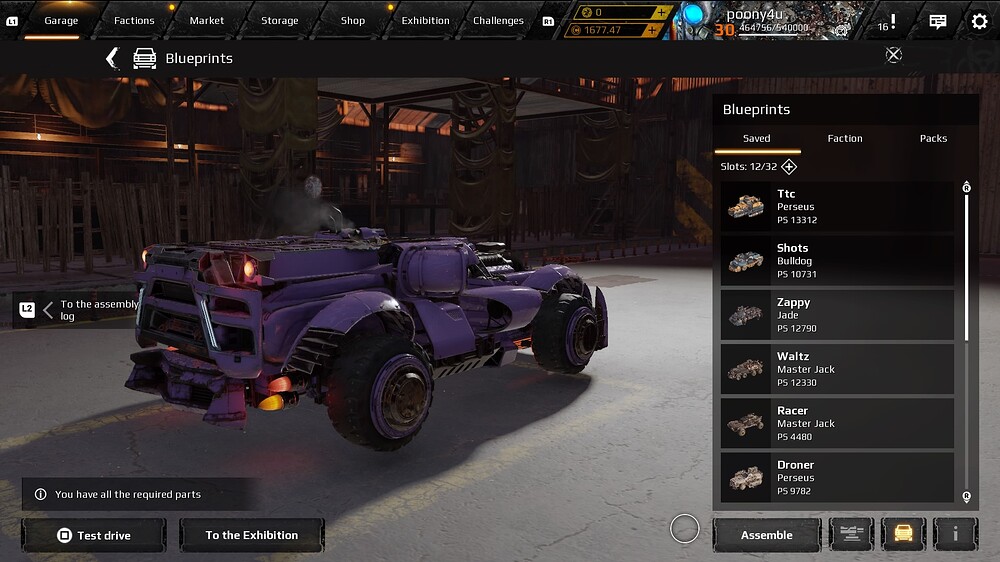 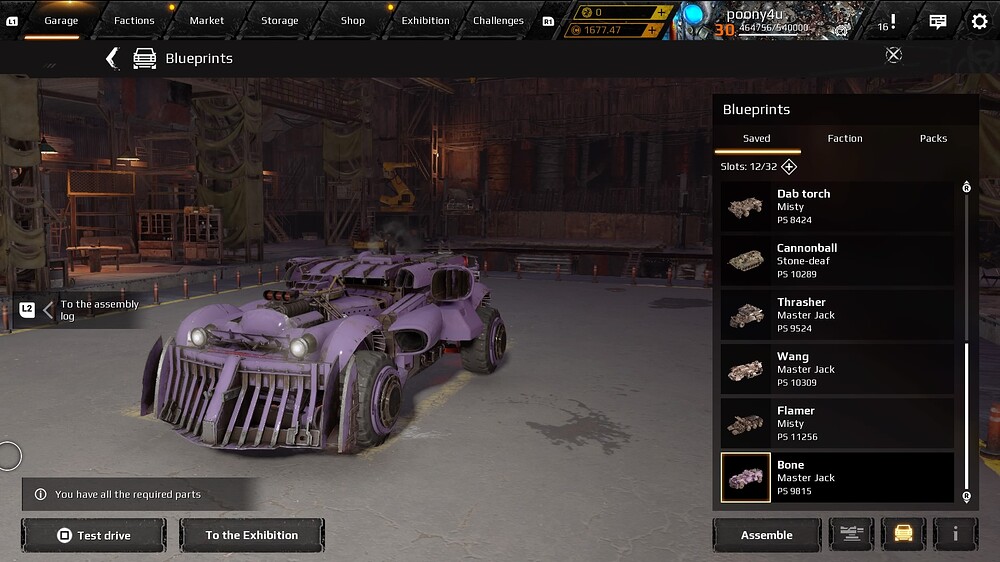 This is a nest/trombone build that I’ve been tweaking for a bit. Useless on one map, but very effective on a couple others.
I was going for a car that the Cramps might drive.

I will get some new pictures soon, but i found this old picture of some of my builds.

Behold, the Red Light Runner! This is the build I used for Operation: Red Light.

Multiple exhaust pipes give additional horsepower to this impressive car.

The multiple lights allow help this car to navigate and night and poorly lit areas. It is also very flashy while not attracting unwanted attention from Ravagers.

Spectre Machine guns are excellent for self-defense. They can target weak points, and put the poor Ravager-infected drivers out of their misery. They’re also great for dealing with other hostiles as well.

A modified after-market Radiator (RN-Seal) is used not only to keep the engine cool, but it can be used to keep the Machine gun barrels cool for sustained fire against hostiles. The Radiator has been upgraded for better cooling efficiency.

Ultra Modern wheels and state of the art suspension allow this car to traverse rough terrain at high speeds.

Stealth is achieved with its digital desert camouflage and Chameleon MK 1 cloak. The cutting-edge cloak is been modified to reload faster. The stealth and high speed are essential for getting out of tight situations.

The Tool boxes and Storage in the back allow for more supplies to be delivered to their destination.

The Horns and Duck act as good luck charms.

And finally, the Guitar is played during down-time. The music played helps boost Engineer and Founders moral during their struggle against the Ravagers.

I would love it if the Operation: Red Light event was added to the Brawl Rotation. 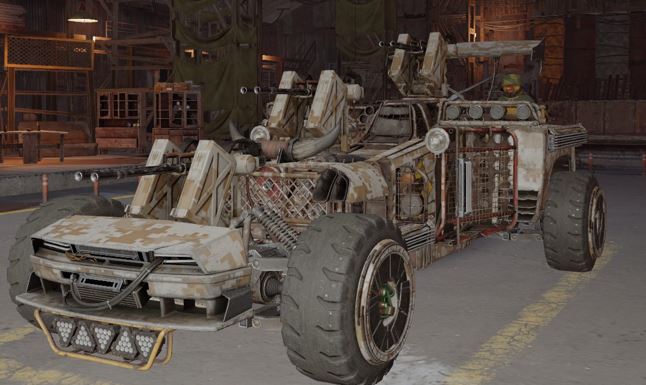 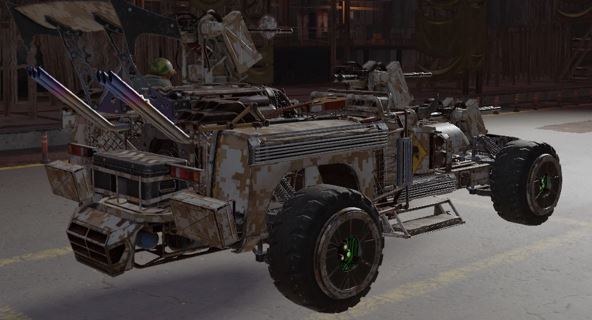 Here’s some photos of the car I posted video of in my first post: 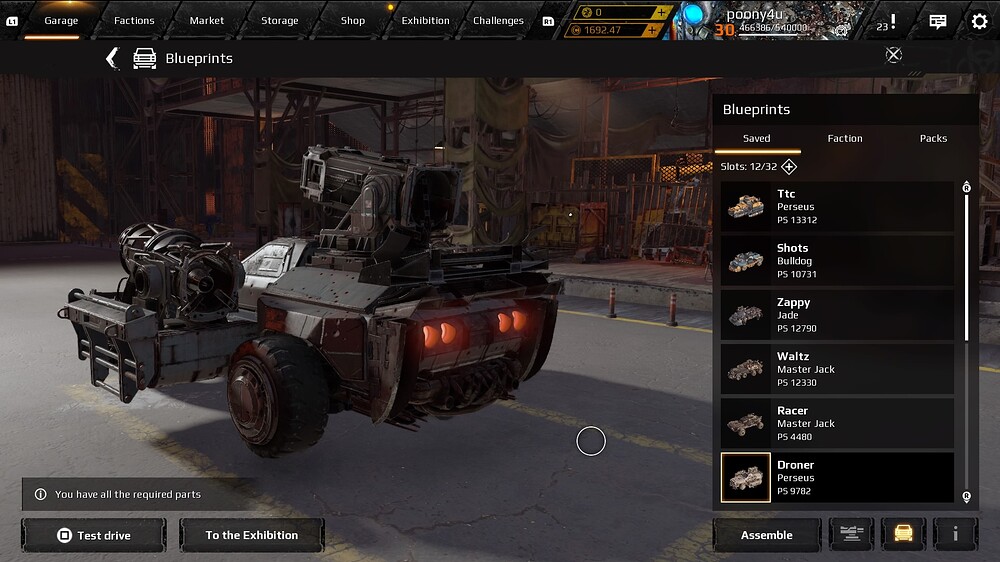 And here’s a Waltz build: 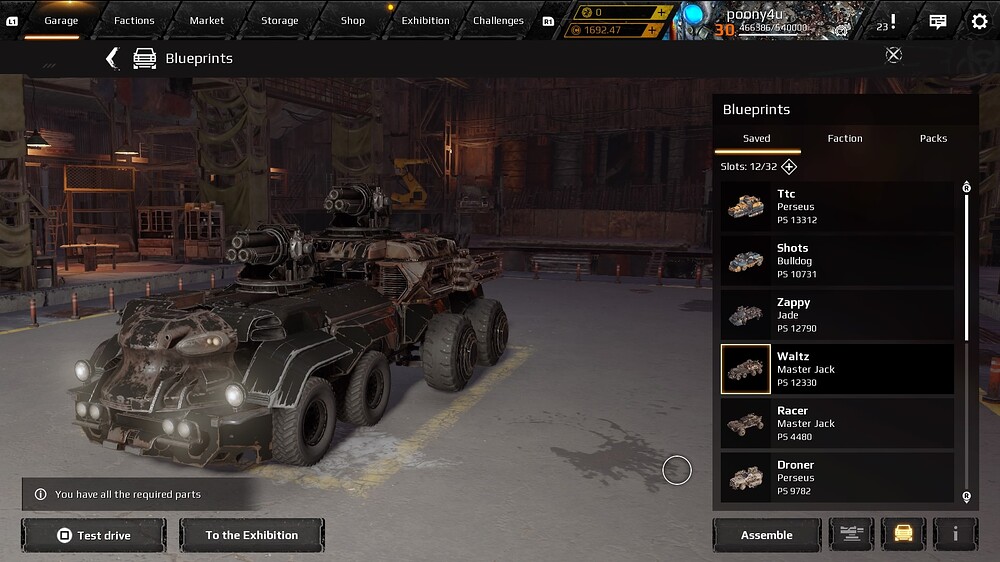 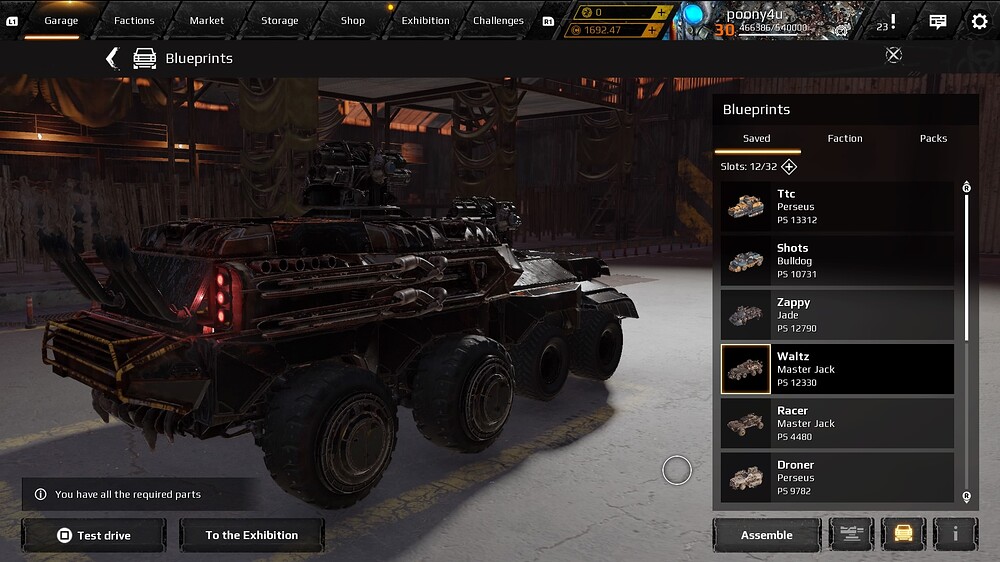 why r all of these so bad lmao

Because they aren’t yours 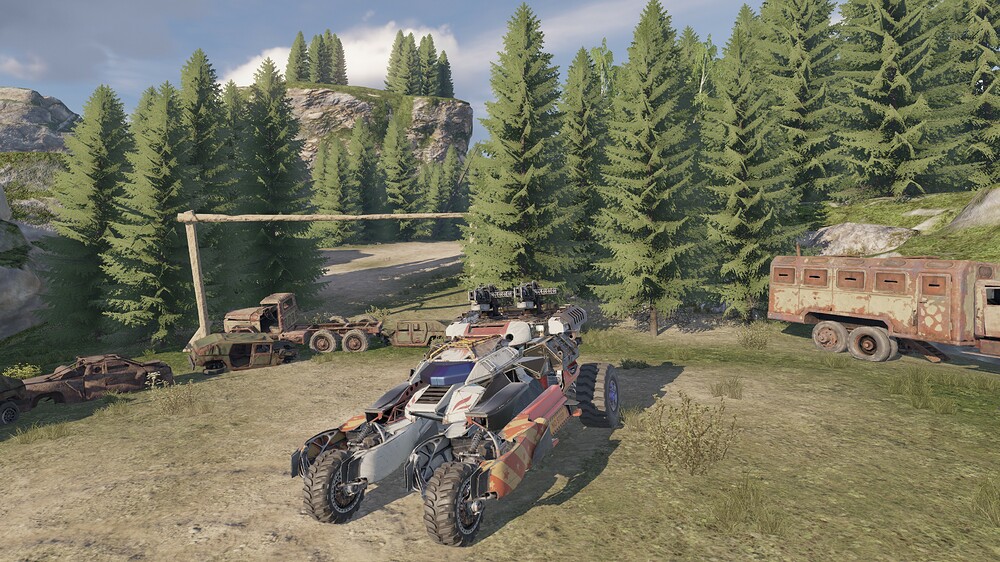 Not all soldiers of the wastes are raiders, scientists, or well soldiers. Some are half crazy mercs who believe they are a kobold. The fox hounds driver is known only as warbrand2 a crazy survivor who thinks they are just that a small lizard.

Thankfully they have grown out of the trap obsessed stage where they mounted a tow to anything with space but now they have become a true threat to the wastes their fast attack vehicle armed with twin plasma cannons and optimized for medium ranged engagements beware as twin plasma cannons, a power unit, two claws and a boosting cab are nothing to scoff at.

I’m no omniwheel expert, but I prefer six to four. Four are very fast, and look better on “car” builds, but I find that six handle better, and really help your survivability. Getting knocked down to three omnis is much harder to deal with than three wheels.
I feel like omniwheels are very underrated, but I also don’t use mine that often.

I’m happy to see so many nice looking builds! I hope some of the more competitive players post some of their CW builds too. I’ve got a few high PS builds now, but that’s not really my thing.

What are you driving these days? 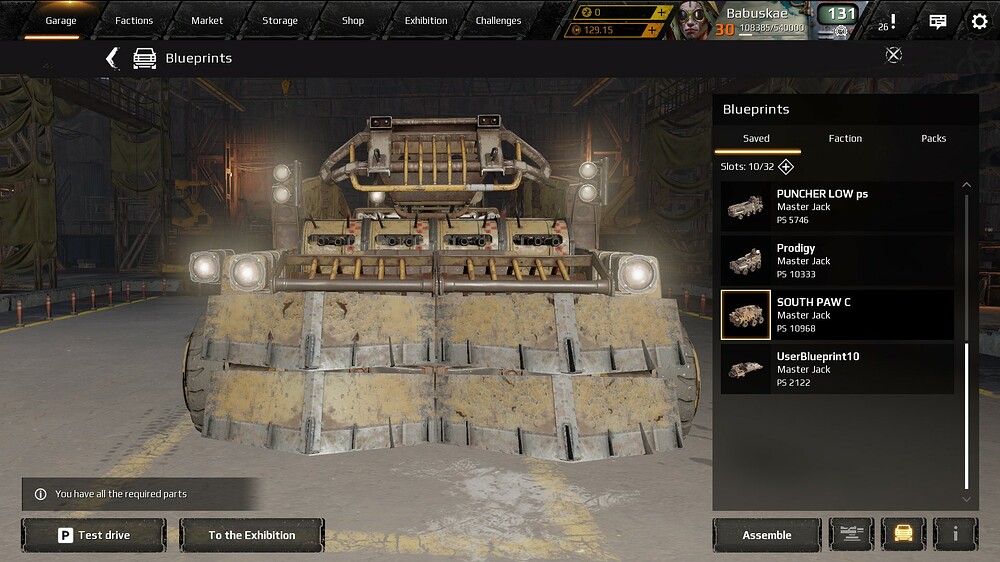